Video Games: From Pixels To The Silver Screen, Is It Finally Working?

With the rise of the popularity of video games since the 80’s, Hollywood has jumped on the band wagon and tried to successfully, and in most cases unsuccessfully, to adapt them into movies. There were films based on the video game genre such as Tron and The Last Starfighter, but nothing of an actual video game character being brought to life into a film.

“YOU MAY THINK OF EVOLUTION AS... AN UPWARD PROCESS. THINGS EVOLVE FROM PRIMEVAL SLIME, UP TO SINGLE-CELLED ORGANISMS, UP TO... INTELLIGENT LIFE.”

One of the biggest video game characters created, Mario, was given the opportunity in Super Mario Bros the movie in 1993 and despite its huge budget it was perhaps one of the biggest movie flops of all time. Street Fighter was released in 1994; the ever-popular arcade game will always be overshadowed by its movie adaption and terrible script; to this day I still don’t understand the story. Then Mortal Kombat was given its place on the silver screen a year later in 1995, and again poor casting and acting reduced this film to the bargain bucket of many a Blockbuster (before they went broke). 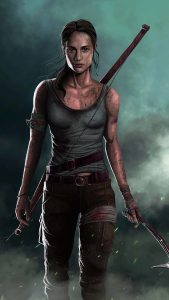 the world sighed with anguish at the latest announcement of a video game adaption, the film was Tomb Raider. The Tomb Raider video game was released in 1996 to much critical acclaim; the game sold over 7.5 million copies and would serve as the model for future action-adventure games.

The heroine of the game was Lara Croft, and designed in mind for every adolescent male teenager’s ideal girl, heavily endowed, athletic, sultry looks and wore very tight clothing. But who could play this heroine in the films? Rhona Mitra was heavily discussed being the game developers ‘muse’ during development, Demi Moore was also in the running due to her similarities in appearance with the designed Lara Croft, but it was Angelina Jolie who received the part to much joy from every teenage boy worldwide. The film itself, although not terrible, wasn’t exactly a masterpiece either but nor was it trying to be, it took twice back its original budget which gave Tomb Raider the green light for a sequel (The Cradle of Life) in 2003, again starring Jolie as the titular character.

A whole host of video game adaptions followed trying to ride on the success of Tomb Raider, one franchise in particular stands out, Resident Evil, the ever present and popular video games had a seamless transition to the big screen and to date has inspired 6 films and grossing over $900 million, with a further and apparently last film, in production. One of the reasons why I think it was successful was that anyone could watch the film, you didn’t have to be a player of the game to understand the story nor did you 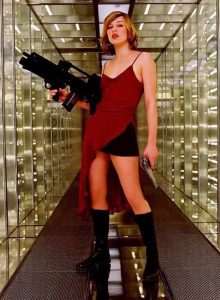 need the back stories to every character introduced. With the rise of zombie inspired TV and films this slotted in in seamlessly and even excelled in some areas.

“THESE ARE THE SACRED TENETS OF OUR BROTHERHOOD: TO STAY YOUR BLADE FROM THE FLESH OF THE INNOCENT, TO HIDE IN THE PLAIN SIGHT, AND ABOVE ALL ELSE, NEVER TO COMPROMISE THE BROTHERHOOD.”

Another film that came to the cinema in the summer of 2016 was Assassins Creed. Like Tomb Raider it has spanned many games and has many diehard fans, and with a cast that included Michael Fassbender in the title role and Marillion Coultilard expectation was high. Unfortunately reviews were mostly scathing although it is arguably better made than most video game adaptations – which is sort of a backhanded compliment.

Without analysing too much about what makes a good film adaption, I would say it is the story of the game and how it transcends to the silver screen. Looking back at the Super Mario Bros movie, the games didn’t really have a good story so the writers of the film had to start with a blank page, and immediately that is where they fail. Mario was a plumber that was transported to another world/dimension to save a Princess from a large evil turtle, very difficult to piece a screenplay from that information. The writers however would only have a handful of different character names and a loose plotline to the video games and came up with their own interpretation, I wouldn’t be surprised if the writers of these films had never 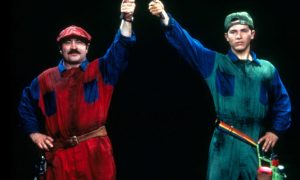 picked up a joypad in their life, and hoped the movie would ride on the popularity of the video game. The same can be said with Mortal Kombat and Street Fighter, there wasn’t really a story behind the games so the writers were ‘let loose’ and without researching in depth they probably thought they could write what they wanted.

With the advent of the Tomb Raider films the film studios did get savvier and worked with Eidos Entertainment, who created the Tomb Raider games, to bring their ideas to life and to recreate the character on screen. This was the first real collaboration that film studios had with a video Game studio. Many video game companies now have their own film studio departments.

The recent film adaption of the popular MMORPG, Warcraft, had Blizzard Entertainment on the forefront when creating the film. I have seen the film, and by no means am I film reviewer, and I felt it wasn’t bad and actually enjoyed it. As a sporadic player of the game I feel Blizzard have done a good job in realising the Warcraft  World on the big screen, although they have struggled to draw in non-gamers, they have turned over their budget four fold since the release, going to show how strong video game adapted films can be if done right.

“THE FATE OF HUMANITY IS NOW IN YOUR HANDS.’

The latest incarnation of the video game movie is the reboot of Tomb Raider starring Alicia Vikander as Lara Croft and based on the 2013 version of the game. Reviews have been mixed and the film has struggled to break even although Vikander’s performance has been praised.

Did you enjoy the latest version? Which are your favourite adaptations of video games? Which ones do you dislike? Which video game you would like to see as a film?  For me the ultimate video game film adaption would be Zelda, great story, great characters, who knows, it may just happen…