Secret Wars – “The Shape Of Things To Come”

Growing up in the 70s and early 80s there were not many superhero related toys. There were the MEGO superhero toys and cars. There were also the Corgi super hero cars, planes and boats. Finally there were the costumes and masks you could buy. But that was it. The figures were not the best figures in the world, they filled a void. 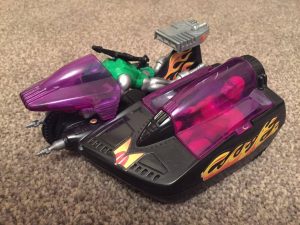 This all changed in the mid 1980s. Kenner brought out the DC Super Powers figures whilst Mattel issued their Marvel Secret Wars figures. I’m not going to go in to much detail about Super Powers as these were figures we found difficult to find at the time and I only seem to remember seeing them once in the City Centre Co-op. We bought a single solitary Joker figure and that was it. Toybiz did reissue, in a fashion, some of these figures in the late 80s/early 90s when the Tim Burton Batman film came out. My little brother got quite a few of them but the quality was not up to the standard of the original Kenner toys.

The toys I’m going to focus on in this blog are real game changers in superhero figures and, which I think, have never been bettered: Secret Wars.

I don’t remember which I saw first the comic or the commercial for the figures of Secret Wars but I was immediately hooked. 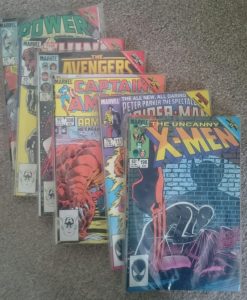 UK Marvel comics. Spiderman, Fantastic Four, X-Men, Thor and the Hulk. These were the A4 British sized comics rather than the smaller American comics. We also got comics such as Eagle, Scream, Transformers, Action Force and the Beano and Dandy, but we’ll look at these comics another time.

Our mum ordered the comic for us and we started getting it the end of April 1985. The comic was every fortnight and it ran for 31 issues. I find it amazing that the original American release Secret Wars series ran for only 12 issues and the British version spanned it out for a further 19 issues! This was done by having only a fraction of one issue of the American comic in the British one. It would always have another comic book story after the Secret Wars episode. This began with Alpha Flight, there was also Ice Man and finally finished with Zoids (Zoids toys had come out a few years prior to this but the comic gave them more popularity again in Britain.)

We definitely got the comic first as this began in the 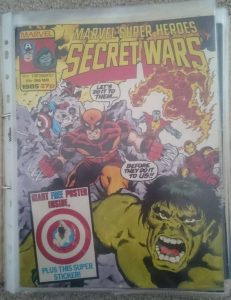 April of 1985. We wouldn’t get the figures until August when we were on holiday. We loved the comic and would get this religiously until the end of Secret Wars II.

Our parents used to take us to Cornwall on holiday almost every year when we were children. Usually the last two weeks in August just before starting back to school. We’d stay at Porth, Newquay at holiday apartments (Porth Cova) that were a stone’s throw from the beach. 1985 was no exception.

I remember a few things about this holiday. This was year that I wanted to go to a Myths and Legends museum in Newquay known as the “Pink Building.” You would think finding a large building which is pink would be easy to find, but not at all. It took us all of the two weeks to find it. It was a Madam Tussauds type of place and my one memory of it was an exhibition of a giant trying to get blood from a stone. This image obviously made a lasting impression on me.

I remember finally finding the building the day we bought our first Secret Wars figures. I can’t remember where we got them from in Newquay but I do remember getting back to the apartment and playing with the figures. Gary had Iron Man, Guy had Doctor Doom and the Doom Cycle, and I had Captain America and the Turbo Cycle. 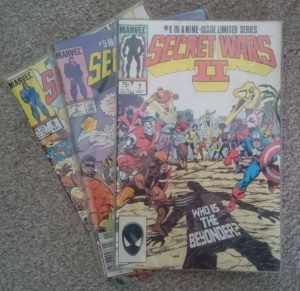 Whilst playing with these I remember on Children’s ITV there was the final episode of the first series (we didn’t know that this would run for 9 years) of T-Bag: Wonders in Letter Land.

I can also remember making a huge sand fortress/castle the next day and playing with the figures and cycles on that.

Those are my memories of getting those first figures. We got the other figures from the Nottingham City Centre Co-op on Parliament Street. I definitely remember going with Gary and my Nan to town and the second wave of figures being there. I got Hobgoblin, and Gary the black costume Spider-Man.

For the 1985 Christmas we received the Tower of Doom playset and Doom Roller vehicle. We still have all these figures and vehicles and fortunately still have the boxes for the Tower of Doom and Doom Roller because we kept the vehicles and figures in them. Looking at the boxes now they still have the Empire Stores stickers on. Empire Stores was a catalogue which you could order items from, now sadly no more. It was a bit like Argos only they delivered the items instead of you going to the store, and you had an account with them.

Like all our toys we had hours of fun with them, we looked after them, and luckily we have 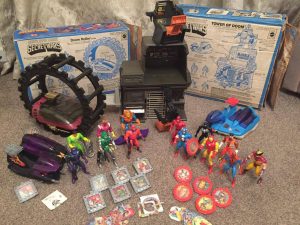 kept them all. It’s funny how you remember certain things. I can’t remember getting any of the other figures apart from the ones I’ve mentioned but I know we got them from the Co-op. The other figure I had was Doctor Octopus, I loved how he looked, just a great figure. Guy got Magneto and Kang 9he loved the baddies!), while Gary had Wolverine and the original Spider-Man.

The other memory I have of the toys is that Gary made a headquarters for the good guys out of Lego, and also the apartment of Peter Parker, complete with skylight so Spidey could make his way out the building. He also customised (badly) a Mego figure of Ilia from Star Trek the Motion Picture into Black Cat. I seem to remember this being the last big battles we had with the figures.

As previously mentioned we collected the Marvel UK version of the comics and we’ve still got a lot of these comics of Secret Wars and Secret Wars II. Secret Wars II went on for a lot longer with 49 comics in all. We didn’t realise at the time that the American comic version only ran to 9 issues. Now no matter how you try and chop a comic into smaller parts and span it out you are not going to get 49 issues out of it! The UK version of Secret Wars II had a variety of different stories including X-Men, Spider-Man and many others. I know that it was from these comics and the original Secret Wars that it introduced me to a whole host of characters I’d never heard of. 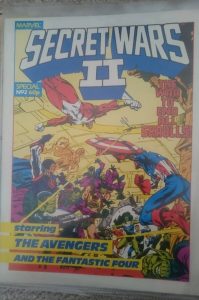 in collected format of Secret Wars from 2005. It was only when reading the forward by Jim Shooter that I found out that toy company Mattel approached Marvel to make figures of the superheroes. This was because Kenner Toys were making the Super Powers for DC comics. The specification which Mattel gave Marvel was to make this an “event”; a special publication or series to help launch the toy line.

The “event” was the Secret Wars comic, and what an event it was! Secret Wars was a game changer for comics. It was the first multi-character cross over series. We’d had the Avengers for Marvel and Justice League of America for DC and few other character crossovers like X-Men with Spiderman and Thor with Hulk but this was HUGE! Without Secret Wars we probably wouldn’t have Civil War.

Without Secret Wars I wouldn’t have known half the Marvel characters I know. We carried on getting comics for years to come, enjoyed so many, and indeed still get our monthly fix of them. However, this was the first comic series that really cemented my love of superheroes.