THE POWER IS IN YOUR HANDS: THE 30TH ANNIVERSARY OF THE NINTENDO GAMEBOY IN THE UK

The early 90s was a great time for gamers; the Video Games market crash of the mid-80s was now on the up. Most of the dead weight companies had been liquidated allowing new fresh ideas to enter the marketplace and consumers still had a hunger for video games. Nintendo riding the wave of their success from the Nintendo Entertainment System or (NES), which was released in Europe in 1987, wanted to keep the market share in their hands especially with Sega hot on their heels. Unfortunately, technology had not caught up and their next major project the SNES was years away from production, what to do?

In the depths of Nintendo HQ a product has been developed, it was small enough to fit in 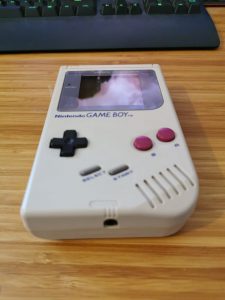 your hand, two buttons and a cross pad, a couple of small speakers and a 2.6’’ LCD screen this was the ‘Dot Matrix Game’……sorry……the ‘Gameboy’, fact, it was initially going to be called the Dot Matrix Game hence the product code DMG-001. Within the Nintendo hierarchy, it wasn’t well thought of, they didn’t like the fact that it had no colour screen, nor did they think the design would appeal to the younger market, but they had no other product to keep a firm footing in the video games war.

They took a punt and produced 300,000 units. On the 21st April 1989, the Gameboy went on sale in Japan, it was a hit, in a matter of weeks all the units had been sold. When released in North America on 31st July 1989 it was a similar story, encouraging Nintendo to increase production and distribute worldwide.

The handheld icon launched in the UK (and the rest of Europe) on the 28th September 1990, again it was an instant success. To this day over 60 million units of the original Gameboy have been sold. Consumers couldn’t get enough of it, here was a device capable of playing the games you had on the NES but you were able to take it anywhere, to school, on the bus, in cars, even on the toilet (yes we have all at one point used an electronic device on the toilet, don’t deny it!).

In all its 8-Bits of glory, were countless hours of fun, the incessant Super Mario theme tune annoying parents on long journeys, to the whirly sounds of Tetris and the inevitable crash tone when you failed (try to do the sound whilst no-one is around…..hilarious!). I was late on the Gameboy scene receiving mine in 1992, at this point there were numerous games and the ones that stood out for me were Zelda, Super Mario Land 2, and dare I say Kid Icarus. The highest selling game on the Gameboy was Tetris at 30 million copies, 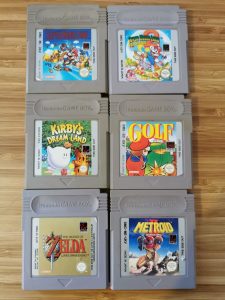 however as the game was included in the early Gameboy bundle packs, although a good game, the figures were boosted because of this. The next highest-selling game was Pokémon Red & Blue, a very popular game in the Asian market; it almost went hand in hand with the Gameboy as a mobile trading/fighting game and helped the Gameboy’s dominance in the market.

Sega, however, were soon hot on their heels, they had created a handheld colour device named the GameGear. It was a larger more ‘clunky’ device and would retail 10% higher than the Gameboy; it had also been released over a year later than the Gameboy to which Nintendo had zapped up most of the handheld consumer market. With a small catalogue of games and very poor battery life the Game Gear sold just over 10 million units until it ceased production in 1997, it had lost the handheld device race. Sega never released another handheld device and had by the late ’90s lost their grip on the Video Game market with the failed Dreamcast and Saturn and eventually turned to Video Game software rather than hardware.

Other competitors tried to jump on the bandwagon, some notable entries are the Atari Lynx, again this was a colour device but again it was entered too late into the handheld market that sales were disappointing. The Lynx, however, is highly sort after these days, with boxed versions selling for higher amounts than the Nintendo Gameboy. The Neo-Geo was another device but this mainly sold within the Asian market, although there were some released in Europe they were in very small numbers and games very hard to come by.

With the emergence of the Sony PlayStation in the mid-90s, analysts and gamers alike anticipated if Sony would release a portable game machine. It wasn’t until nearly a decade later in 2004, when they finally released the PlayStation Portable or PSP. It was a very advanced piece of hardware that as well as playing games you were able to connect to the internet and watch movies on the go.

"ESCAPE TO A WORLD OF COLOR"

Although Nintendo’s market share in the handheld market has become more competitive however they have gone from strength to strength with various versions of the Gameboy, periodically releasing new versions. The first of these came on 20th March 1995, when the standard model was reissued in several different coloured cases, advertising them in the "Play It Loud!" campaign, and known in Japan as Game Boy Bros. The Gameboy Pocket followed in 1996, simply a smaller, more compact, version of the original, with the Gameboy Color (as its title suggests this had a colour screen) hot on its heels in 1998. The Color was superseded by the Gameboy Advance in 2001 and the Advance SP in 2003, both having better graphics and colour display. 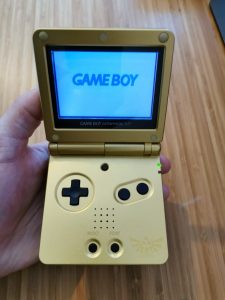 Always moving forward the Gameboy title was dropped with the arrival of the Nintendo DS, or simply DS. Released globally across 2004 and 2005, the DS (standing for "Developers' System" or "Dual Screen") introduced new features to handheld gaming, namely two LCD screens that worked together (the lower one a touchscreen) a built-in microphone and wireless connectivity.

Its successor was the 3DS which was released in Japan on 26th February 2011, and worldwide in March 2011. Its selling feature was its ability to display stereoscopic 3D effects without the use of 3D glasses or additional accessories. It also offered Virtual Console, which allowed owners to download and play games originally released on older video game systems. Unfortunately, the DS family has been discontinued as of this month.

The Switch and Switch Lite, are Nintendo’s next generation of handheld consoles and have been incredibly successful. The 1989 release anniversary came and went with no rerelease of the original Gameboy. However, there are still rumours circulating that with Nintendo’s re-imagining of the old video game consoles that we may eventually have either a new Gameboy on the way or possibly even a revamped original like the NES & SNES that Nintendo has been released over the past few years. Either way; please take my money!