“WHEN I SAW HOW REAL VIRTUAL REALITY CAN BE, AND THAT WE CAN REPLACE HUMAN VISION WITH VIRTUAL VISION, THIS CAN BE THE ULTIMATE PLATFORM.”

There I was as a wide eyed 11 year old, watching a person on a podium kitted out with various equipment and looking like a Borg extra out of Star Trek, this was VR and no matter what you looked like at the time you were itching to experience this new world of wonder. This was the early 90’s and I had pestered my dad to take me to Trocadero in London’s Piccadilly Circus to try this new gaming experience that I had only seen on Gamesmaster (yes the old TV show with the late great Sir Patrick Moore).

I can still remember putting on the headset, and being a rather lightweight 11 year old, I almost toppled over, it weighed an absolute ton. So there I was, standing on a podium trying to keep my balance in the dark and then suddenly it turned on, I was immersed into completely different world, and you were now not just viewing the computer game on screen; but part of it - you were Tron.

“I THINK A LOT OF PEOPLE HAVE AN IDEA OF VIRTUAL REALITY FROM SCIENCE FICTION, BOOKS AND MOVIES THAT HAVE BEEN OUT OVER THE LAST COUPLE OF DECADES.”

The technology back then was basic, to properly understand, for those of you too young to remember is to watch a film called ‘The Lawnmower Man’, this film jumped on the VR 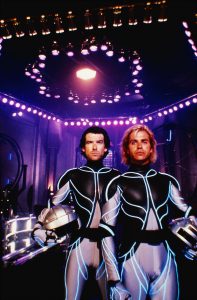 craze of the early 90’s and although badly scripted it did have some fascinating ideas of the possibilities of VR.

But as quickly as VR arrived it was soon buried in the archive of technology next to the Sinclair C5 and Pagers.

Back in 2014 Oculus announced on Kickstarter that they were near development of a new VR headset that would be compatible with home computers, the funding website soon ravaged like a Californian bush fire and in a matter of days Oculus had not only reached their target but exceeded it tenfold, VR once again was the hot technology. Now over 20 years later and with the advancement of technology, VR is making a comeback on a huge scale and that have forced the technology industry to turn their heads.

“WE'RE FINALLY GOING TO BE FREE OF THE 2D MONITOR. IT'S BEEN A WINDOW INTO VIRTUAL REALITY THAT WE'VE ALL LOOKED INTO FOR 30 OR 40 YEARS.”

Although we are now in 2016 and still no VR headset has hit the market, they will be by the end of the year. Oculus as well as Sony, Microsoft and whole host of others are 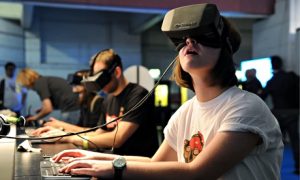 scrambling to have their VR devices released before each other and this is an exciting time for the consumer. It is also not just the gaming industry that has joined the race, with the emergence of smart phones and social media; everyone has seen the potential of how VR can be of benefit not just to gaming but across numerous services, media and communication. Imagine speaking to a friend across the other side of the world and actually having the experience of being in the same room although thousands of miles apart. Don’t get me wrong, services such as Skype and Facetime are great but they are limited, but having a feeling where you could be there is on a whole other level.

Think of the impact on education; my history and geography lessons involved working through an dirty old text book or trying to understand the teachers badly drawn diagram on the chalk board, instead you could go back to any period in time or any location in the world and experience the events first hand, it truly could be amazing. I for one would probably have benefitted from this at school.

“I'D REALLY LOVE TO WORK WITH VIRTUAL REALITY AT SOME POINT. YOU COULD MAKE A KILLER ADVENTURE GAME WITH THAT.”

And going back to the gaming side, imagine taking on Bowser alongside Mario, racing Sonic or taking on Tie Fighters next to Han Solo and Chewbacca? If you’re not excited by any of this then I am at a loss! But gaming will be the entry point of VR and with so much financial implications on the line I really hope the game developers have nailed it, as a lot rides with these guys and we don’t want another Atari/ET fiasco.

Where will VR be in the future, hopefully still with us, and as mentioned there are so many possibilities outside of gaming, and the list is endless, this really could be a game changer and a benefit for everyone.

Sonic get your racing shoes on!