“Beyond Good. Beyond Evil. Beyond Your Wildest Imagination.”

In the mid-eighties my love of Star Wars took a blow. Return Of The Jedi had come and gone, no new sets of Kenner toys were to be made, and the Marvel comic had reached a conclusion.

It was only the Ewoks movies, the Droids cartoon, and the Ewoks cartoon that kept my interest fuelled for quite a while. It wasn’t until the early 90s that any new Star Wars material was released and rekindle my love of the films. 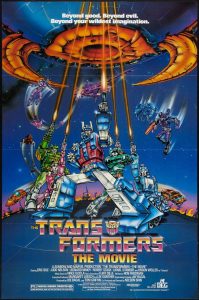 completely and in fact was, for me, like Tyrell’s quote to Batty in Blade Runner: a light that burned twice as brightly but burned half as long.

I initially loved the Transformers toys. The heroic Autobots and evil Decepticons came from the planet Cybertron and had crashed on Earth to continue their centuries old battle.

I can remember the Christmas of 1984 when I was bought Soundwave  – a Decepticon with the ability to transform into a Walkman – and Buzzsaw – a robotic falcon who could become a cassette.

My brother and I soon began collecting the toys (any birthdays or Christmases would feature them, if we had any pocket money it would be spent on them), we read the UK Marvel reprints of the comic book (which in turn led me to becoming a massive fan of the art of Lee Sullivan who drew for the UK storylines), we watched the cartoon series (which was shown on Timmy Mallett’s Wacaday every morning in the school holidays), I even sat drawing the robots and designing my own which transformed.

“MEGATRON MUST BE STOPPED... NO MATTER THE COST.”

And then came the first cinema outing for the robots in disguise: 1986’s Transformers The Movie. It was a big deal in many ways, a full length film based on a toy, based on a TV show, that warranted a theatrical release and a rock soundtrack, that featured the voices of famous names (Leonard Nimoy, Judd Nelson, Eric Idle, Robert Stack, Lionel Stander, and, of course, Orson Welles).

The movie is an odd thing. At the time it was set in the future – 2005; twenty years away which for a 13 year old seemed a lifetime. It featured a return to Cybertron and visited some other planets also populated with transforming mechanoids.

It also was intent on killing off every character that we had grown to know, love, and had spent good money on buying in toy form over the past two years! Autobots; Brawn, Huffer, Prowl, Bluestreak, Ratchet, Ironhide, Wheeljack, Sideswipe, Sunstreaker, Red Alert, Hound, Gears, Grapple, Smokescreen, Trailbreaker, Mirage, and Windcharger, all destroyed in the movie.

The Decepticons had fatalities too but most of these were upcycled by Unicron (the planet devouring nemesis of the film voiced by Welles himself in his final role) to become new warriors.

“ONE SHALL STAND, ONE SHALL FALL.”

The film was total carnage but the biggest punch to the stomach that the film delivered was the death of the Autobot leader: Optimus Prime.

It was the most shocking part of the whole film for me. The Autobot that everyone loved,

voiced so distinctively by Peter Cullen, finally destroyed by his arch enemy the maniacal Megatron. What made it worse was that Prime had won, it was Hot Rod (a new character that had been introduced at the beginning of the movie) wading in to ‘help’ that ultimately led to Prime’s demise.

Megatron delivers the laser blasts to Prime’s body that prove fatal. Prime does manage to strike one last time and the Decepticon leader plummets off the edge of a high drop where he is broken but still functioning.

I defy anyone who invested any time in the original cartoon and toys to have not been choked by Prime’s death bed scene in this film (and strangely feel some sympathy for Megatron when the traitorous Starscream kicks him while he is down.) After 30 years I can still recall Perceptor delivering the line “I fear the wounds are fatal.” and Prime imploring the assembled allies “Do not grieve, soon I will be one with the matrix.” Him then weakly trying to hand over said Matrix of leadership to Ultra Magnus and it falling from his fingers as his life begins to fade.

To drive it home even harder the readouts on the computer monitoring Prime’s vital signs flatline, his blue eyes begin to splutter and die, and the colour drains from his body leaving him a charcoal black husk on the table. And Prime’s final words?

“USE THE POWER OF THE MATRIX TO LIGHT OUR DARKEST HOUR. UNTIL THAT DAY, TILL ALL ARE ONE.”

That’s emotion right there, in a thirty year old cartoon aimed at kids!

Although I didn’t realise it at the time, clearly it was a clever marketing ploy by Hasbro to introduce new characters and toys and get us buying the replacements for our now dead favourites. However knowing that still doesn’t take away anything from that scene.

I didn’t see the film at the cinema first but on VHS. This is where I have an odd memory of a film being released to video very quickly. We definitely didn’t rent it from the local video shop in Sherwood, we were bought it and it couldn’t have been that many months after the initial cinema showings as our interest in the toys was starting to wane.

For a brief time, literally three years, the Transformers were our number one obsession; however, in hindsight a few factors led to their demise in our hearts.

Firstly, the toys were not incredibly robust; parts did break very easily, particularly when being transformed constantly. Secondly, the play value was limited, often the toys were fine as vehicles but were not so articulated as robots. The comics and cartoon were able to make them interact with each other, with humans, and with their environments, in a way that the toys couldn’t. In a way that had been so easy to do with Star Wars figures.

“WATCH, I'LL HAVE THEM EATING OUT OF MY HANDS. BAH WEEP GRAGNAH WEEP NINI BONG!”

Rewatching the film as an adult I still prefer it to the Bay live action movies, yes it has aged but not quite as badly as I had feared it would , yes it probably is ridiculous in places – I’m still not overly keen on the ‘comedy’ element of the Dinobots - but I still love the soundtrack with its soft rock version of the theme song by Lion, and its contributions from Stan Bush with the brilliant “The Touch” and Weird Al Yankovic’s “Dare To Be Stupid”, the film still delivers more emotional impact, characterisation, and better story telling. Crucially you can make sense of who is doing what and why, and the story resolves to a satisfying conclusion.

What ultimately killed Transformers for any child of the eighties wasn’t the death of Optimus Prime but the death of our childhood in 2007 with the new movies.

Bay would be well advised to go back and read the comics by Marvel, rewatch the cartoons and film, go and play with those original toys, and try to understand what made Transformers great for so many for ,albeit a, short time in our lives; and then walk away from the franchise and leave us with our treasured memories.