Last Christmas I gave you my heart

T’was the night before Christmas when all through the house……

I’ve never really thought about why I like Christmas. Let’s face it most people like Christmas, but can you put your finger on the reason why you love it? Family and friends you may only see at Christmas? People may make that annual pilgrimage to Church? Your children’s faces as they open their presents? You opening your own presents! It’s a really magical time of year.

I hate those first few months in the New Year: January to March. It’s dark and there’s nothing really to look forward to until the sun comes out in April. It wasn’t until someone said to me they love the lights at Christmas that I realised this is one of the things I love about Christmas. That’s what I hate about the New Year: it is dark and there are no lights or decorations.

This is one of the things that I remember about Christmas when I was little. The decorations going up in our house. My brother and I would help as we danced around (in a comical Laurel and Hardy way) to Perry Como and Andy Williams records. This was the 80s so it was a lot of tinsel and streamers and when you are a child there are more relatives and that older generation was still alive, so there were a lot more Christmas Cards. These cards used to line the walls in our hallway and in the living and dining room.

What made Christmas more special was that my Granddad and Nana would come and stay for a few days. We’d have more relatives around throughout Christmas, my Aunty Annie, other cousins as well my Uncle John and Aunty Maureen. We’d have a cupboard under the stairs full of alcohol and soft drinks for when people visited. I loved the Babycham and the little fawn on the wrapper, and because it was Babycham and for babies I was allowed a glass of it (Parents do not try this at home).

It was only a winter’s tale

But apart from my family and the lights there were my brothers and toys and TV, Christmas wouldn’t be the same without the TV and toys. Dad bringing home the Christmas Radio Times and TV Times was such a big deal!

It certainly wouldn’t have been the same without my brothers to share all of these things with.

This is what makes Christmas so magical when you are little. That you are going to get visited by Santa Claus and he’s going to leave you toys. What is this craziness?! Just like the Miracle on 34th Street with Richard Attenborough says “I believe” when you’re a child you really do believe.  I still have the badge with those two words on from when that movie came out (which Gary got for free from the Odeon for me) and it reminds me every year of how that belief made such a difference that you can never seem to fill.

A Christmas that does stick in my mind was that of 1984. We received a mixture of toys that year and I think you’ll agree they were all awesome. What I really wanted that Christmas was Optimus Prime of the Transformers. I even remember writing this in my writing book at school, which I’m sure my mum as lying around in a draw somewhere. My 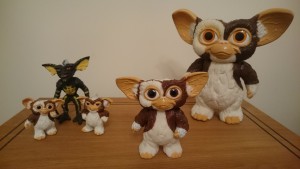 I was a bit gutted on Christmas morning as I didn’t get Optimus. He was just too hard to get in the Christmas rush. Instead my parents got me a Gobot/Robomachine: a black train which transformed into a robot. Gary did get Soundwave and although I was disappointed I got so many other toys it didn’t really matter.

That year we got Gremlins toys – Guy had the big Gizmo, Gary had the smaller one, and Ihad the set of Gizmo, Stripe and Stripe as a Gremlin. I also got the Rancor from Star Wars for Christmas and have a vivid memory me and my brothers in the kitchen pretending that the Rancor was a Gremlin jumping out of cupboards at us. 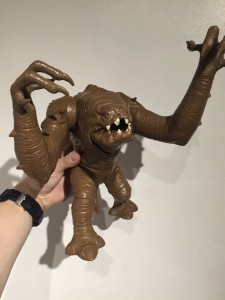 Also that year I got the cardboard Action Force base by Palitoy. This was based on the cardboard Death Star design from Star Wars. This was used as a base for my Gobot that Christmas.

What I remember is that we didn’t just play with one toy and use it for what it was bought for. Our toys were used for a range of other things and would interact with the other toys we had. We had very good imaginations and would play for hours. (As an adult don’t you miss playing?)

(After talking to Gary about this I may have combined two Christmases together. The Gremlins were 1984 but the transformers were 1985.)

The Wolves are running

There are a few television moments I remember at Christmas from when I was young. Especially the build up to Christmas. The Box of Delights was one. This was on children’s television throughout December up until the Christmas Eve of 1984. It truly is a great piece of children’s TV.

Myself and my brother Guy re-watched this on DVD a few years ago and it lived up to my expectations. It really does aim at the Christmas market and it was timed to finish on Christmas Eve when the final episode is set.

Another children’s series which was on during the build up to Christmas was The Children of Green Knowe. This was a tale of ghostly goings on in a mansion set at Christmas. We watched this last Christmas on DVD and we all agreed this programme would not get made today as it was so slow and not much happened in terms of action. It is all about atmosphere and characters.

At the time we lapped it up but it was simpler times back then even if we thought it was cutting edge for the day. Today’s story telling relies on quick stories that cut from scene to scene to keep people’s attention.

Just as an aside; two films which I watched in my school and college years in the 90s each Christmas were Scrooged with Bill Murray and The Lemon Drop Kid with Bob Hope. They were part of my Christmas build up. I still love those films and if I get the chance I will watch them at Christmas. Every year I will always put Bill Murray’s final speech in Scrooged on my Face Book page because that sums up Christmas to me.

It’s the season of love and understanding

So in answer to my earlier question of why do I love Christmas? It’s all of the above. Family, friends, lights, decorations, shops, presents and TV. I don’t think you can have one without the other. Christmas is that magical time of the year. Forget the commercialism, forget the internet shopping and interact with people. In fact I think Bill sums it up better…..

How did that happen? That happened because it's Christmas Eve. I'm not crazy. It's Christmas Eve. It's the one night when we all act a little nicer. We...we smile a little easier. We...we...share a little more. For a couple of hours we are the people we always hoped we would be. It's really a miracle because it happens every Christmas Eve. And if you waste that miracle, you're gonna burn for it. I know. You have to do something. You have to take a chance and get involved. There are people that don't have enough to eat and who are cold. You can go and greet these people. Take an old blanket out to them or make a sandwich and say, "Here."

"l get it now." And if you give, then it can happen, the miracle can happen to you. Not just the poor and hungry, Everybody's gotta have this miracle!

It can happen tonight for you all! If you believe in this pure thing, the miracle will happen and you'll want it again tomorrow! You won't say, "Christmas is once a year and it's a fraud." It's not! It can happen every day! You've just got to want that feeling! You'll want it every day! It can happen to you! I believe in it now. I believe it's gonna happen to me, now. I'm ready for it! And it's great. It's a good feeling. It's better than I've felt in a long time. I'm ready. Have a Merry Christmas. Everybody.

Hope everyone had a great Christmas and have a fantastic New Year.