How come you do me like you do do do?

I write a lot of blogs about films I love and then talk about the related toys and when I got into these films.

This blog is different: it’s about comics. In fact, it’s about one specific life changing comic for me; that came out between July and December 1986.

I will give the briefest of histories on the comics my brothers and I used to get as children. These were the usual British comics such as the Dandy and Beano, Eagle and 2000AD and the Marvel UK comics of Transformers, Secret Wars, Doctor Who and Star Wars.

We had the occasional American format comics. I have the original Rom and Micronauts comics we bought in the late 70s and I’m sure Gary had a few more of these American smaller sized comics.

This was before you had specific comic shops such as Forbidden Planet and the smaller independents. We used to get comics from the newsagents on our road and our grandparents’ road. I will talk about our British comics another time as we still have a lot of these and I can go into greater detail about them.

Eat your beans at every meal

The advert in this comic was for Son of Ambush Bug. It looked funny and stupid and the 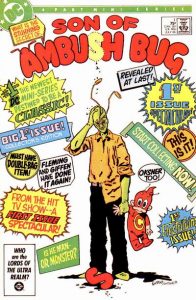 The first issue looked amazing. From the front cover it just had funny written all over it. The story is that Ambush Bug knows he’s in a comic. The first issue opens with Ambush Bug talking to his agent that’s he’s on welfare because Darkseid had his super-villain permit revoked. The main villain against Ambush Bug is The Interferer, who is going around the universe changing everything to how he wants it and Ambush Bug is the only person who can stop him because he knows he’s in a comic book. Ambush Bug’s adventure begins by him transforming into Amber Butane (of the Amber Butane Corps), dying and dancing the jitterbug with fat people for all eternity, because of The Interferer. There is also a second story of another villain, Argh!yle the arch enemy of Ambush Bug who is one of his socks that has been disfigured and wears a mask, oh and I should mention that Ambush also has an adopted son named Cheeks….who’s a cuddy toy.  It sounds crazy and it is insane for a comic, but definitely well worth reading.

My elder brother Gary, as I’ve said previously, was and is an amazing artist and he could draw anything from comics. So Ambush Bug was great for him to draw. I think when he 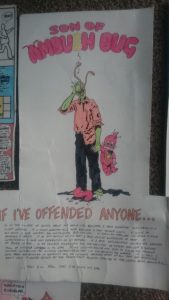 started in the 4th  Year of Secondary School he had to make his own cardboard art folder and drew a lot of stuff from the Ambush Bug comic, including the first cover. When Gary was at school he wanted to be a comic book illustrator, but getting into the comic book industry in the 1980s when you go to an East Midlands Comprehensive School was difficult. He just didn’t have the help (or understanding) from teachers at our school to advise him on how to go about it.

What was different about the Son of Ambush Bug comic was it being a mini-series. This wasn’t an on-going weekly comic like the ones we were used to, this was 6 issues which were coming out monthly. There had been plenty of mini-series before like this in comics but this was the first time I’d bought one and it was the first time I’d heard about them.

I hereby sentence you to dance the jitterbug with fat people for eternity!

The second thing this comic introduced me to was Keith Giffen. Keith Giffen is an all-rounder of comic books – an illustrator and writer. He probably is an underrated talent within the comic book industry. In 1987 Giffen took on the Justice League comic and at this point in the DC universe it was pretty dark with the Dark Knight Returns, Batman Year One and The Killing Joke. Instead of going dark and serious, Giffen injected just the right amount of humour into Justice League International. From this moment on I loved the characters of Blue Beetle and Booster Gold. 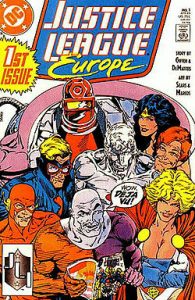 Europe. This included an ensemble cast of great characters such as the Elongated Man, The Flash, Animal Man and Captain Atom. Even though Giffen left in 1992 and the comics went slightly serious I still collected the Justice League comics until the end of their run.

Another comic character and series which Giffen created and will be remembered for is Lobo. Similar to Ambush Bug Giffen created Lobo in 1983 as a villain. He then became an anti-hero biker in the early 1990s being a pastiche of Marvel characters Cable, Wolverine and Punisher. Even though it was a pastiche he added to the genre and went beyond the original intention and became a well loved character in his own right.

As I’ve said in 1986 the only way to get comics was from the local cornershops and newsagents, can you actually buy American comics from these places now? Because of only being able to get comics from these places I had a few issues missing of the American comics I had. So in my adult years I have had to scour comic book fairs, flea markets, second hand shops, and eBay to complete my collections of Justice League and other comics. 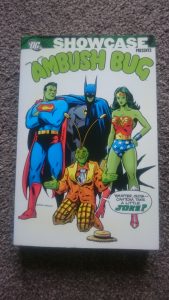 however I did manage to get this in 1989 from a shop in Great Yarmouth during the summer holidays. It was a shop that sold everything and had a big selection of comics there. The comic wasn’t in the shop but having spoken to the shop owner he had a lot more comics in storage and I asked if he could get me issue 4 of Ambush Bug. The next day he had it for me. My holy grail of comics was complete!

My brothers and I got quite a few comics from this same shop in Yarmouth. Gary bought the Mad Dog 4 issue mini-series and I got Fire Storm the Nuclear Man and a few issues of Mister Miracle. As I’ve said Son of Ambush Bug changed my life by introducing me to a whole new world of comics. I started buying Justice League America and Europe comics, Howard the Duck and Firestorm. I also got some unusual comics I wouldn’t really think about buying nowadays such as Sgt Rock and Creature Commandos.

In the early 90s I even got Mad Magazine and obsessed with the artists and writers of it. This was more to do with Steve Martin reading Mad Magazine in Dirty Rotten Scoundrels but Ambush Bug did open my eyes to comics being funny and not just action, and I do have a passion for comedy.

Ma’am? Are you by any chance wearing a pacemaker?

I probably stopped buying comics in about 1999 or somewhere around then. Some of my collections remained incomplete. I got a few series of comics in the early 2000s – notably Micronauts when it was re-envisaged by Image. In the mid-2000s there was a follow up to Keith Giffen’s Justice League, with two mini-series which he wrote – Formerly Known As The Justice League and the follow up I Can’t Believe It’s Not The Justice League. They were just as good as the 80s and 90s Justice League Giffen had produced.

In 2009 for my birthday I got a present from Gary of the Showcase Presents Ambush Bug, which collected all the Ambush Bug adventures together; ones I’d never read before and this was great to see the development of Ambush Bug from comedy villain to comedy hero.

It was around this time that I found out that there had been a more recent Ambush Bug comic in 2008 which had not been in the Showcase collection, this was Ambush Bug Year None. I wasn’t a big comic book collector at this time and I’d just missed this Ambush Bug comic as I wasn’t going into comic shops regularly.

Then I’ll feel that I’ve done my job

In 2014 I started getting back into comics, bizarrely through Kevin Smith films. I’d started re-watching Kevin Smith films again around September 2014 and it made me want to re-read my comics. The character of Brodie in Mallrats with his comic collection is great, but the theme of comics runs throughout all his films – With Banky and Holden in Chasing Amy as comic book artists and writers.

Bug. First I bought the Year None comics and then worked my way back to get the rest of the Ambush Bug four part mini-series from 1985, the Stocking Stuffer Christmas Special and all the other issues he’d ever appeared in for Action Comic prior to him having his own comics. I also picked up the Justice League America and Europe issues I was missing, and Howard the Duck.

But what came out of this is that I started collecting new comics again. I started going to the comic shops regularly again with Phil and Gary. Buying Justice League 3000 by Keith Giffen, Back to the Future comic, Ghostbusters International, the new series of Howard the Duck and even the British 2000AD to name a few.

I may have had the wilderness years of not buying comics but there is nothing more enjoyable than buying a new comic and I’ll always remember that first mini-series of Son of Ambush Bug.