“In The Beginning It Was All Black and White.”

A few years ago I had a rather strange experience in my classroom. I taught year 4 (8 and 9 year olds) at the time and we were involved in a topic on World War II.

As part of the topic we looked at wartime entertainment and so I decided to give them a 1940’s cinema experience. This involved setting the room out to look like a cinema, we had the interactive whiteboard set up to look like a cinema screen and the program was a Pathe Newsreel, a cliffhanger serial, and a comedy.

The serial was the 1936 Flash Gordon starring Buster Crabbe. And this is the weird bit – 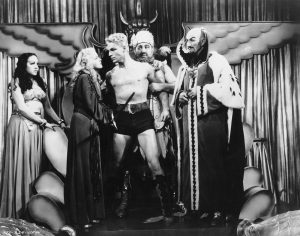 the children asked me if it was real. “What do you mean?” I asked. “Did this happen?” was the response.

Now, considering this was the part where the giant lizards begin to fight this seemed very odd! Let’s be honest, the special effects aren’t really very special by today’s standards so how would it convince these sophisticated children that it was a piece of history or a documentary?

After much thought about this I’ve come to the conclusion that it is changing visual literacy. In this generation’s eyes black and white film equals an historic event. But why should this be so? When I was growing up in the 70’s and 80’s repeats of black and white TV shows and transmissions of black and white films were still quite normal. They weren’t necessarily at times of peak viewing but they weren’t hidden away in the schedule. Often they were aimed at a young audience i.e. children. My earliest memory of a black and white series that I loved watching was The Adventures of Champion (the wonder horse). Yes, it was quite old, even back then, but it didn’t stop me getting up early on a Saturday morning and tuning in to BBC1 to enjoy it – I can still sing the theme song word for word all these years later!

“TAKE HIM TO A LABORATORY. GIVE HIM EVERYTHING HE REQUIRES... EXCEPT HIS FREEDOM!”

For example: the Flash Gordon serials were shown each night during the week on BBC2 at around teatime. I can remember being introduced to the character through this pre-WWII matinee favourite.

It was thrilling, fast paced, the characters were clear cut – bad or good. The cliffhanger ending did make me want to tune into the next chapter. The special effects were noticeably not as good to a kid who had been taken to see Star Wars, Star Trek The Motion Picture, Battlestar Galactica and Superman at the cinema but it didn’t matter. I loved the designs of the spaceships, the guns, the costumes, the stories. Not once did I question whether this was a piece of historical footage and I would’ve been about 7 or 8 years old when they were shown.

Luckily, for me at least, this wasn’t the only serial that was shown. Flash Gordon’s Trip To Mars (1938) and Flash Gordon Conquers The Universe (1940) followed. At around the time that ITV showed the Gil Gerard Buck Rogers, BBC2 showed the original 1939 version, again starring Buster Crabbe. I lapped them up.

Two other that were shown around this time were King Of The Rocket Men (1949) starring Tristram Coffin (great name!) and Undersea Kingdom (1936) starring Ray “Crash” Corrigan, who had been a stuntman.

King of The Rocket Men was shown by BBC2 in the same teatime slot, daily, over the course of a couple of weeks. Undersea Kingdom I have a recollection of being shown as part of the Saturday morning children’s programming on a weekly basis. If memory serves it was actually part of Swap Shop or Saturday Superstore. Does anyone else remember?

These same serials were also shown regularly, and daily, in the six weeks’ summer holidays too.

One glorious summer holiday (possibly 1984 or 85?) ITV Central repeated, in all its 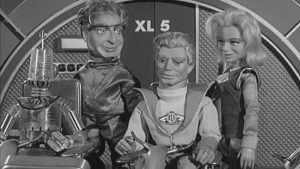 marvellous monochrome, the entire run of Gerry Anderson’s Fireball XL5 in the morning children’s TV slot. I sat and made the space ship from card and drew the characters. Again it’s a fast paced show, great music, great spectacle, great characters, simple but clever stories that kept my attention for the half hour that they played out.

When Tim Burton’s Batman was released in the cinema in 1989 Channel 4 showed the 1943 Batman serial during the summer break. I can’t say I enjoyed this quite so much, I loved the Burton version but I also loved the Adam West and Burt Ward 60’s series and so this version just wasn’t Batman. Did I watch each of the 15 chapters? Of course I did! And the follow up 1949 Batman and Robin which was shown at a later date.

It wasn’t just black and white serials that I loved. Comedies were also featured with far more regularity than currently on TV. Channel 4 showed the Munsters (a particular favourite of mine), Bewitched, and I Dream of Jeannie to name a few. 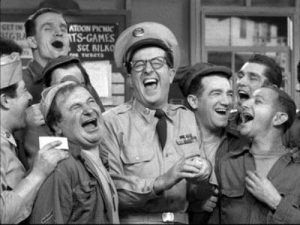 and white UHF TV. Our region couldn’t quite receive the new Channel 4 station and this was the only way to tune in, making sure the set was facing the right direction to pick up the signal and get a very fuzzy picture.

There are two shows that stand out from this period for me: The Abbot and Costello show (Channel 4) and The Phil Silvers Show (BBC2). I was just at the right age when they repeated them to appreciate the timing, the combination of slapstick and clever wordplay, and of course the characters. Silvers as Sgt. Bilko is a tour de force and both myself and my brother found him hilarious.

"YOU CAN LEAD A HORSE TO WATER, BUT A PENCIL MUST BE LEAD."

Going back to my class and their education in black and white movies, the one film that they loved will probably be no surprise to anyone. I presented them with 1932’s The Music Box starring the irreplaceable Laurel and Hardy. I have never heard or seen children laugh so much. Their reaction was quite incredible and, for me, moving.

I have very happy memories of watching Stan and Ollie with my grandad when I was a child, he loved them and so I loved them too. Both of my brothers also became fans of the pair, no-one more so than Craig who has a complete collection of their films and many many books about them.

In 1990, the year that Stan would’ve celebrated his 100th birthday had he been alive, we went to Ulverston, the place of his birth. There we visited the unusual museum founded by Bill Cubin, which is dedicated to them both, it was like a pilgrimage for our comedy heroes.

Even into the early 1990s black and white films featuring Laurel and Hardy, Harold Lloyd, Buster Keaton, and Charlie Chaplin were being aired on UK terrestrial channels.

Certainly the last real gasp of this (that I can recall) was when The Addams Family film was released in 1991 and the original series was repeated on BBC2. Many Chaplin films were shown when the Attenborough movie was being lauded in 1992, showing even silent films weren’t totally out of the question for TV at that time. Small pockets of resistance have been offered by BBC2’s sporadic repeats of 1960s Doctor Who, Steptoe and Son, and Hancock’s Half Hour in the late 90s.

"WELL, HERE'S ANOTHER NICE MESS YOU'VE GOTTEN ME INTO.”

So what has changed from the 90s? Am I imagining that there are less monochrome films shown on TV? I’m pretty sure the only repeat of a black and white series that I’ve seen recently is the original episodes of Dad’s Army or, again, Hartnell and Troughton Doctor Who on BBC4. Is it because of HD that these early movie masterpieces and series can’t be shown? Is it simply that things move on? That tastes change and the public won’t accept a lack of colour on their screens? I suspect it’s a combination of all of these factors.

Indeed, I know at least one person who claimed that they had never watched a single black and white film or TV show – that slightly terrifies me!

Black and white can and does work, take the success of Spielberg’s Oscar winning 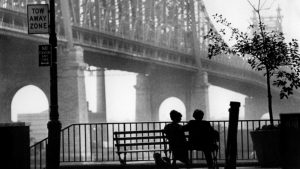 Schlindler’s List from 1993, Kevin Smith’s Clerks in 1994, more recently in 2011 with French romantic comedy-drama The Artist, or any number of Woody Allen films. How many times does Citizen Kane top the polls in the best films of all time?

If they continue to be so popular at the cinema, in public polls, and awards ceremonies, then why should they be denied better time slots on the small screen? To me it seems a shame that new generations are missing out on some wonderful pieces of celluloid whilst at the same time being denied access to our cinematic and televisual heritage. Black and white on TV shouldn’t be limited to being part of documentaries involving Pathe news reels, or highlighting how we used to live, it shouldn’t be confined to history, it should be celebrated and enjoyed by future generations.

As digital photographer Dominic Rouse says: “Colour is everything, black and white is more.”