Indiana Jones and the Geek Force

When I wrote my blog on Spielberg and Me I soon realised that there was way too much about his films that I love to write in one bite sized chunk, otherwise it would have been too long. It dawned on me, half way through writing Spielberg and Me, that Indiana Jones was really special to me, and I think it will be surprising to people the way it became so important to me.

I can’t remember the exact first time I heard of Indiana Jones, I’m assuming it was when Raiders Of The Lost Ark came out at the cinema but like the Goldbergs’ all I can say is it was 1980 something.

I remember there were two television adverts that spoofed Indiana Jones which I think came out around the time of the first film. The first advert was a Terry’s Chocolate Orange commercial which had a middle aged man recreating the opening scene of Raiders of the Lost Ark to get a chocolate orange instead of the idol. The second commercial was a Weetabix breakfast cereal advert which was animation of the one of the Weetabix gang in an Indiana Jones outfit with a bull whip and pulling his hat from under a closing wall. I knew these commercials were spoofing Indiana Jones but had not seen the films at the cinema so I must have seen something on TV about them.

Also the year after Raiders was released there was a television show rip off to cash in on the success. This was Tales of the Gold Monkey, my elder brother and I would watch this each week. We knew it was in the same vein as Indiana Jones, and we loved the idea of the dog with one eye – obviously the producers of this show realised this would appeal to our demographic. Unfortunately the show was short lived and only one series was made.

My first proper introduction to Indiana Jones was by the Marvel comic strip, this was not 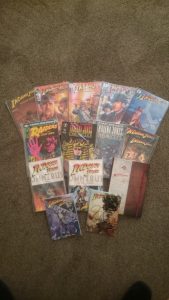 the American comic but in the UK Marvel Return of the Jedi release (as an additional story that accompanied the main Star Wars series).

I finally saw Raiders when it premiered on television on ITV, we recorded it when it was on and remember that the first commercial break came at the point where Indie is flying off in the plane with Jock and just declaring “I hate snakes!” I enjoyed the film and we watched it as many times as any of the other films we loved. I can’t say that I was into it as much as other films at the time, maybe because it was more of an adult film and maybe because the figures were never released in the UK. We did like toys and figures so I would imagine that is one of the reasons I didn’t get into as much. I can never understand why Kenner never released the toys in the UK.

The first memory I have of Temple of Doom I have is of Gary, my elder brother, watching this at school at the end of his second year at secondary school. His Science teacher, Mr Denman, said that he was going to show them a film that may help them with a career choice in the future. He then proceeded to show Indiana Jones and the Temple of Doom - Gary did take history so maybe it did influence him?

By the time the third film came out I was at secondary school.  Last Crusade came out in 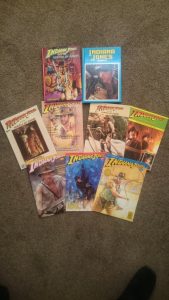 the summer and it was one of the three films that I thought were the must see. The other two were Licence to Kill, the new James Bond film starring Timothy Dalton, probably my favourite Bond. The other film of 1989 that overshadowed them all was Batman. Looking back Last Crusade is a far better film than Batman, in fact I would go as far as to say Licence to Kill is a better film than Batman. Crusade was the first Indiana Jones film we rented from our local video store and watched it a few times before returning it.

By the time Young Indiana Jones debuted on television in 1993 we were big Indiana Jones fans in the Barwell house. We weren’t that keen on Young Indy but we watched them each week and recorded them off TV (let’s face It we recorded everything). Bookending each episode was Old Indiana with his eyepatch, I wasn’t overly impressed with this I suppose you don’t want to see your heroes get old, after all Harrison Ford could (and will) play old Indiana now and still looks good for his age. A lot of people must have felt the same way about old Indy for reasons I will go into later.

And then that was it for many years. Young Indy was axed after the third series and I thought that was the end of Indiana Jones. Gary had bought the boxset on video so I watched that quite a lot and the extra tape of the making of Raiders of the Lost Ark was really good with the song “Movies, Friends and 8 by 10s”.

“…INDIANA JONES. I ALWAYS KNEW SOMEDAY YOU’D COME WALKING BACK THROUGH MY DOOR. I NEVER DOUBTED THAT. SOMETHING MADE IT INEVITABLE.”

But as I’ve said I wasn’t a massive fan of Indiana Jones. I never got the Dark Horse comics or the computer games in the 90s. But then something happened that would change my world forever and this is the surprising part. In 2008 Indiana Jones and the Kingdom of the Crystal Skull was released at the cinema. I went to see the film at the showcase in Peterborough and I didn’t expect to be so taken with it. But I loved it. The next day I went out and bought the sticker album and seem to think I stuck the stickers in during the Eurovision Song Contest that night! 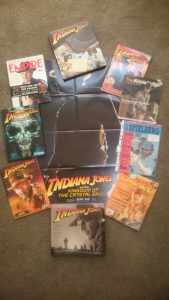 child you only get one or two packs at a time, when you’re an adult buying your own packs you can get as many as you like and so I did, 10 or 20 packs at a time! I had completed that sticker album in a matter of weeks.

Watching Kingdom of the Crystal Skull ignited a love for Indiana Jones which I hadn’t previously had. I know people are divided on Crystal Skull and most gravitate towards dislike but for me it is everything that Indiana Jones is; only set in the 1950s with cold war and aliens, just like the B Movies of the 50s, whereas the original trilogy tapped into the B Movies and serials of the 1930s. I think it is very clever and underrated what Spielberg and Lucas did with this film. I think in years to come it will be recognised as a really good film.

After watching this I bought all the figures and vehicles to the new Indiana Jones film, It was great because I’d never had the figures before, as I said previously Kenner never released the figures in the UK in the 80s. I know the Hasbro figures have their detractors but I think they are really good figures, they look like the characters they are meant to look like, they bought out a selection of figures from each film and they had great playsets and vehicles.

I also got all the books, comics and magazines that were released at the time and then I worked my way back buying the Dark Horse comics from the last 20 years. I wanted to devour every aspect, I even bought the Indiana Jones novels.

The final things which I bought were the box set of the films and the Young Indiana Jones on DVD, which had just been released that year. There were 3 box sets for the Young Indie DVDs, one for each series. I re-watched all the episodes and the noticeable difference was that old Indiana had been removed from it. He no longer book ended the stories as though he was reminiscing. Young Indiana Jones is really enjoyable and it is shame they didn’t do the next few series as Abner Ravenwood and René Belloq would have made appearances in them.

On re-watching the films again after Crystal Skull I realised how much fun they were. What the Indiana Jones films do is make the unbelievable seem believable with a mixture of straight acting, comedy and magnificent effects and stunts. Does Kingdom of the Crystal Skull overstep the boundary with aliens, or interdimensional beings as they are?

They are all ridiculously unbelievable but they somehow seem realistic. Maybe an alien in Indiana Jones is a step too far for some people but hey it’s the movies, it’s not real life, if you want real life watch the news.