“A LONG TIME AGO IN A GALAXY FAR, FAR AWAY…”

I can’t lay claim to watching the first Star Wars in a different galaxy – to be exact it was in Devon.

I went to see Star Wars in the Whitsun holiday of 1978 (May time.) I was 4 years old (so I guess that qualifies as a long time ago!) and it was the very first film my parents took me to see at the "Pictures".

We were on holiday in Paignton at the time and I was so excited about finally getting to watch it.

I had already got some of the figures, bubble gum cards, and comics as it had been out for a while by the time I went to see it.

The cinema I went to is sadly no longer a cinema although the building is still there. 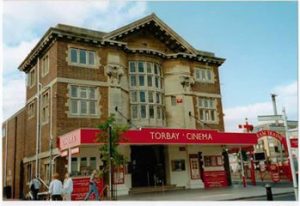 I can remember we nearly missed the entire beginning of the film as there was a railway track nearby, without a footbridge, and a train coming meant the barriers were down holding us up!

We just managed to get there in time. In fact I am pretty sure we missed the iconic introductory crawl, the main title music, and the Star Destroyer opening sequence and caught it from when the droids were escaping from the blockade runner. Luckily this was in the days when they showed the film back to back and so I did see the beginning but at the end if that makes sense?

The only photo I could find of the cinema is from sometime in the late 80s.

“Remember The Force Will Be With You Always.”

As a first cinema experience it is no exaggeration to say it helped shape the formative years of my life. The film really fired my imagination as a kid and was instrumental in starting my lifelong love of sci-fi and movies and, of course, Star Wars in all forms.

I went to see both The Empire Strikes Back in the May or June of 1980. I was 8 years old 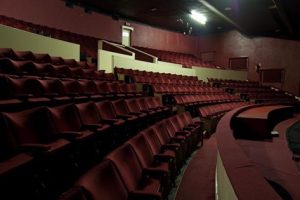 and my brother Craig was 4. By now I had got him hooked on Star Wars too via the toys, books, and comics.

We went to watch it at the Byron Cinema in Hucknall, Nottingham (named after Lord Byron who is buried in St. Mary Magdalene church in the town centre). This was in the days when an interval still occurred and a hostess would come round selling ice cream in tubs, with a wooden spoon, and cheap orange drinks in plastic cartons.

“Adventure. Heh. Excitement. Heh. A Jedi Craves Not These Things. You Are Reckless.”

Empire was an absolute revelation in so many ways. I was thrilled by it and even at that young age I knew what I was seeing was a change in tone from the first film. I particularly loved the sequences on Hoth with the tauntauns and wampa, and was amazed by the AT-AT and Snowspeeder battle. 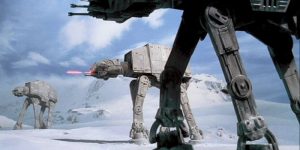 asteroid field and escape from the giant wormlike creature’s jaws.

I immediately loved the sinister and playful Yoda and, even though he was partly responsible for the capture of my favourite character, the mysterious bounty hunter Boba Fett.

I was shocked by the reveal of Darth Vader claiming to be Luke’s father and I just couldn’t believe it. He was a baddie, he had to be lying to trick Luke!

My first encounter with Return Of The Jedi was on another family holiday. This time we were going to Newquay in Cornwall in the July of 1983. On the way we stopped at some services and my mum bought me the novelisation from one of the shops there (possibly WHSmiths). I poured over the photos in that book and remember being intrigued by the Biker Scout and Wicket.

“You're Going To Find That Many Of The Truths We Cling To Depend Greatly On Our Own Point Of View.”

We eventually saw the movie in the August or September and I thought it was incredible. I 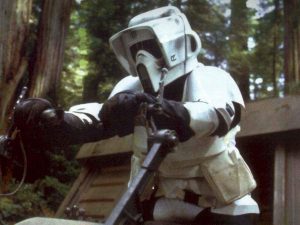 know that ROTJ is often seen as the weaker film but as a 10 year old watching it, it was simply the best movie I had seen.

I loved the creatures in Jabba’s palace, the fight with the Rancor and the battle of Sarlacc’s Pit were tremendously exciting (although I was annoyed that Boba Fett seemingly died), the speeder bike chase was breath-taking and, I’m not ashamed to say, I really liked the Ewoks a lot. I didn’t see them as annoying back then – I still don’t mind them in all honesty.

In my opinion it is the longest finale ever filmed. Many of the storylines that have been set up in the previous two films are concluded neatly, there are huge set pieces with the battle of Endor on the ground, the Death Star battle in space, and Luke’s personal battle with Vader and the Dark Side

Our heroes are divide but are relying upon each other to fulfil their particular role in bringing about the destruction of the Emperor. It’s lighter than ESB but it works and it holds up pretty well.

“I Think My Eyes Are Getting Better. Instead Of A Big Dark Blur, I See A Big Bright Blur.”

My mum took us on both occasions and, she claims, fell asleep during both - to this day 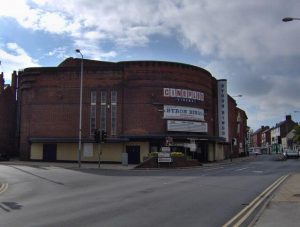 she hasn't watched either: she indulged us our love of them and endured them herself!

Again, the Byron building is still there (I now work at a school nearby and pass it every day) and the current owners are trying to raise funds to reopen it as a cinema. We went to see a lot of films there in the early/mid 80s. I'd love to see it restored and up and running as a picture house once more.

I would also love the original trilogy to be reissued in their original forms without all of the Lucas special edition tinkering . Surely with the 40th anniversary of Star Wars next year this is something Disney have in mind?

The films have had an enduring appeal for so many people around the world and it’s almost impossible for me to put my finger on why, after all these years, I love the original trilogy so much. Some of it is because of the feelings I associate with them from childhood, some of it is the spectacle, some of it is the likeable performances by a great cast, and some of it is the endless creativity that can be seen on screen.

As we celebrate Star Wars day I will be watching the new Force Awakens film on DVD (again), I will be reminiscing about how it felt to be that small boy growing up in the 70s and 80s when anything seemed possible and I will be transported, once more, to a long time ago and a galaxy far, far away.