I can’t remember the exact moment that I was aware of the films of Spielberg. Maybe I was just born aware of him. I was born in 1977 and as you may know I have an elder brother, Gary, who’s 4 years older than me. So from the moment I could play I knew about Star Wars and the toys. Star Wars was the ultimate childhood toy, maybe, but I’m not here to talk about that.

“I want to be the Cecil B. DeMille of science fiction”

Gary was always into UFOs and Sci-fi 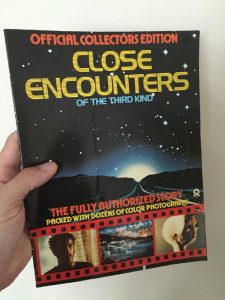 and I was brought up with this. So I remember from an early age Close Encounters of the Third Kind and that Gary had a movie adaptation photo story book, he’d also got a book on UFOs which we would read and read. On the front cover of the Close Encounters book was the image of the road with the light in the distance, an iconic image, and one which I used in a GCSE Art project in the early 90s.

I can’t remember when I first saw Close Encounters, but remember re-watching it on video in the early 90s. It is similar to the format of Jaws. It builds up and gives a big pay-off ending with the mother ship at the end, a theme Spielberg would return to. After watching it in the 90s I wouldn’t watch Close Encounters again until 2006 when I bought it on DVD, this was the special edition and I watched all of the extra documentaries. It really is an amazing film and Spielberg was pushing the limits of special effects. 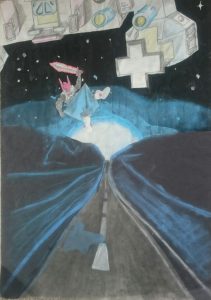 Before Close Encounters though there was Jaws. Another film I was always aware of as Gary had the Jaws game. This was similar to Buckaroo only you had to fish the “junk” out of Bruce the shark’s mouth without his jaws closing. I seem to think I saw Jaws in about 1980 or 81. It was definitely before the defining Spielberg film; E.T.

As I’ve said previously it is similar in style to Close Encounters there is a build-up towards the pay-off end of trying to kill a giant shark in a boat. I think everyone who saw this film as a child will remember the death of Quint. It is spectacularly horrid how he dies in the jaws of the shark. Both this film and Close Encounters deal with the adventure that unfolds whilst also dealing with the reality of families. I think it is the family situations which roots these films in the real world and makes them so appealing to people.

“Every time I go to a movie, it's magic, no matter what the movie's about”

The next Spielberg film was Raiders of the Lost Ark and the Indiana Jones franchise was born. I will talk about this though in another blog as there is too much to say about it. So I now come to that Spielberg defining film E.T.

I think people forget what a big event E.T was at the time. It was on every television programme. I remember coming home for lunch one day from school and it being on the lunchtime news. E.T seemed to be everywhere. I cannot remember when we went to see E.T but I remember that myself and Gary were taken to see it by our mum. Unlike a lot of people we did not cry when E.T died, we were die hard UFO and Alien experts so why would we?!

E.T had the elements of Jaws and Close Encounters the adventure and family situations. 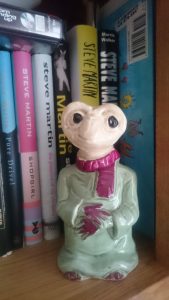 The difference with this film is that the stars are children. It is just a magical film. There are so many memorable moments and scenes in E.T.  The flying bike in front of the moon, E.T making the plant come back to life. How many people who saw the film at the time did not say “E.T phone home”? Growing up around this time you would immediately know where this phrase was from.  The thing about ET the actual alien shouldn’t work, but like hairless pets we love him!

The music as well, like most of John Williams’ musical scores, stays with you long after you have seen the film. We were humming that theme after hearing it in the cinema. John Williams wrote the sound track to our childhood with all those great scores to films –Jaws, Superman, Indiana Jones, Star Wars and E.T to name a few. The music went hand in hand with the films. I would say that E.T is my favourite John Williams film score ever. I love the Indiana Jones music but E.T just has so many memorable movements - one of my favourites, on the extended soundtrack, is called Escape/Chase/Saying Goodbye which encapsulates the music in a 15 minute opus.

The toys that we got from this film were various. The first toys our parents bought for us of 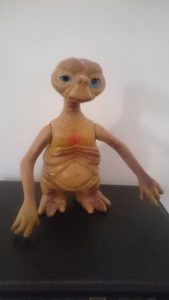 E.T were from Jersey when they went for long weekend there. The E.T toys were bootlegs I’m assuming. They had lighting up eyes and healing finger. Gary seems to think that we had these figures before we went to see the film as we took them with us to the cinema. E.T was released in December 1982 in Britain and my parents went to Jersey in January 1983.

The other figures we had were the non-movable ones which were official releases from LJN. They were E.T in various guises and positions. But the toys which I loved and played with more than any others were the LJN E.Ts with extending necks and moveable arms and came with their own speak and spells. I played with mine so much I broke the arm on it and later it got thrown away.

Amazingly I really wanted a Speak and Spell around this time probably not to use to spell (as at this point I hated reading) but it must have been to make the satellite to “phone home” for ET.

“I don't dream at night, I dream at day, I dream all day; I'm dreaming for a living”

I would say E.T is the peak for Spielberg in terms of everything coming together. He may have made better films after this but for me this is the ultimate Spielberg film and I think through this it allowed him to do a lot more in terms of producing films and the Steven Spielberg presents tag. This I will talk about another time.

The films after E.T which Spielberg directed for the rest of the 80s varied in subject. He tried other adult themes in his films – The Colour Purple, Empire of the Sun and Always. He also came back to the Indiana Jones films again and again.

He started the 90s with a children’s film again in Hook which critically got panned but did well at the box office. It was his next film that was an out an out success, Jurassic Park was the blockbuster of 1993 and it’s the film I would like to finish this article with.  This is probably the last great Spielberg movie, which pushed special effects to the next level and allowed every film that needed CGI in the last 23 years.

I was finishing Secondary School in this year and after finishing my exams and leaving school myself and Gary, who had finished University for the summer, went to see Jurassic Park at the Showcase cinema in the afternoon to see it.

It was an amazing film and return to form for Spielberg who had not really done this type of film since E.T. Obviously he’d carried on with the adventure with Indiana Jones but there hadn’t been that scary element of Jaws or Close Encounters.

I never got the toys that were released for Jurassic Park. Kenner released these figures and they didn’t really look like the characters. To me they were a bit of a poor imitation of Kenner’s past glories, there were a lot of poor figures in the nineties but Jurassic Park were better than most.

Spielberg went on to make a lot of other films which have varied in themes and styles. He finally got an Oscar for Schindler’s List, which was released the same year as Jurassic Park. I can’t think of two more diverse films to direct at the same time. Dinosaurs and the Holocaust.

“All of us every single year, we're a different person. I don't think we're the same person all our lives”

I do think that many of his films after Jurassic Park any director could have directed and in a way Spielberg’s never got to the heights of Jurassic Park again. That’s my opinion and I’m sure that there are people who could argue he has done better films since then but I would love to see another film by Spielberg with a story by him just to see what he would come up with now.

But not to end on a down beat I still can’t fault the films Spielberg’s made since Jurassic Park, they are always enjoyable and I went to see A.I, War of the Worlds and The Terminal all at the cinema, and Indiana Jones and the Kingdom of the Crystal Skull gave me a new found love of his films again. As I said at the start of this article I love Steven Spielberg.