Before I tell you why Roxanne is a perfect comedy film I’ll give you my brief history of how I first got into the work of Steve Martin.

The only film I’d seen Steve Martin in before 1990 was The Muppet Movie as the ignorant, arrogant, condescending waiter serving Kermit and Miss Piggy on their date in the restaurant. A brilliant cameo by Martin. The next programme I saw Steve Martin on was introducing the 20th Anniversary special of Monty Python’s Flying Circus showing clips of the series called Parrot Sketch Not Included – 20 Years of Monty Python. The programme went out on BBC TV in 1989 which was my first introduction to Monty Python. I actually found Steve Martin irritating on it and it didn’t make me want to go out and see any of his movies. (Bizarrely, I started writing this blog in June and before coming back to it recently to finish it, the Parrot Sketch Not Included programme was on TV and I saw it for the first 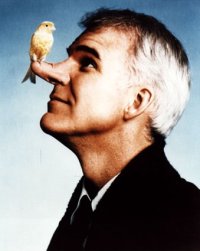 time in 28 years - happily Steve Martin wasn’t as irritating as I remember). It wasn’t until the Christmas of 1989 that this all changed when Roxanne was premiered on television.

I really enjoyed Roxanne and this changed my opinion of Steve Martin following the Monty Python programme. Strangely my younger brother Guy was bought Roxanne for Christmas 1990 on video and Gary received Pennies from Heaven. I didn’t get a Steve Martin film at all!

It was around 1991 that I started getting into The Not Ready for Prime Time Players Saturday Night Live cast and all of their films and the music that they had released. I’d seen a lot of Dan Aykroyd, Chevy Chase and Bill Murray films already – Ghostbusters 1 and 2, Spies Like Us, Dragnet, Blues Brothers, Neighbours, Scrooged, the National Lampoon films and Fletch had all been watched hundreds of times.

Gary’s friend Nick was a big fan of SNL and let me borrow the best of John Belushi and Steve Martin Live on video to watch. These were the days before I could copy videos so I ended up recording the sound of them to a tape so I could listen to them again and again.

I started buying all of Steve Martin’s films on video or recording them off TV when they were shown. I remember seeing All of Me and Dead Men Don’t Wear Plaid for the first time on TV and thinking how funny they were. The body movement of Martin in All of Me is amazing and you actually forget it’s just him and really do believe that one half of his body is possessed by Lilly Tomlin.

I remember buying LA Story in 1992 when I was on work experience from school. I watched and liked it but it wasn’t my favourite of his films. I seem to remember the reviews at the time being lack lustre for it when it was released at the cinema in 1991. With the years gone by I changed my opinion, I think by the late 1990s I would say it is one of his best.  In fact the reviews have also changed their tune when I have seen it appearing on television. It is one of his best comedies with so many different styles of comedy within it, and his love letter to LA. I think it is probably up there with Roxanne. But let’s return to Roxanne and what makes this the perfect comedy.

At the time Steve Martin was on top of his game. He was a great comedy writer of TV shows, stand-up comedy and then movies. Having co-written the screenplays for The Jerk, Dead Men Don’t Wear Plaid, The Man with Two Brains and Three Amigos Martin finally wrote a screenplay on his own. 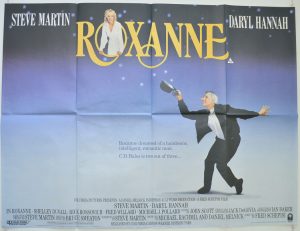 by Martin, who also starred as C.D. Bales (get it?) the love-struck Fire Chief. It’s astutely directed by Fred Schepisi (Six Degrees of Separation, Fierce Creatures).

Roxanne had been released to critical acclaim in 1987. The basic story line is boy meets girl, boy falls in love with girl, girl falls in love with someone else, boy and girl get together in the end. It’s a simple premise but Martin has the Cyrano De Bergerac twist of having the biggest nose in a film ever. Which is a great piece of movie prosthetics because you do forget it’s fake.

Martin, in the movie, is not just playing his wild and crazy guy persona which we had seen in The Jerk and Man with Two Brains but he also brings pathos to the roll of someone in love, and that love is not reciprocated.

There are so many memorable scenes within the film from the opening credits of Martin singing and fighting the “coked up drug addicts” with his tennis racket, the physical performance of Martin in this scene is fantastic and so graceful.

The scene with Daryl Hannah locked out of her house naked and Martin talking about the lack of irony in the town is a great introductory scene for Roxanne to the movie.

Then there is Martin with his tour de force of “twenty something better” after someone calls him big nose is a great scene. (Geek fact – he goes twenty-five better, if you’ve never counted)

He’s also helping Chris, the new fireman in town, woo Roxanne and the fantastic scene under the balcony as he tells her how he really feels is funny and at the same time romantic and this leads into my all-time favourite scene for sheer wild and crazy Martin pretending he’s been abducted by aliens to a group of old women.

Not only is the script fantastic but the cast are perfect. Steve Martin and Daryl Hannah star with Rick Rossovich as the dim fireman Chris and Shelley Duvall as C.D.s best friend. Also in the supporting cast as the firemen are Fred Willard, Michael J Pollard, John Kopelos, Damon Wayans and also a brief cameo by SNL star Kevin Nealon. The film is tightly scripted and in many ways the blue print for all the rom-coms that came after this and are made today; just look at When Harry Met Sally, Four Weddings and a Funeral and Notting Hill - they owe a huge debt of gratitude to the structure of it. I would even go as far as saying Roxanne is the first ever modern day rom-com.

“WHEN YOU’RE REACHING FOR A STAR, THERE’S A LONG WAY TO FALL.”

Steve Martin went on to make other great comedy films such as Dirty Rotten Scoundrels, L.A. Story, Father of the Bride and Bowfinger to name a few. But Roxanne will remain up there with the best of his work and one of the most perfect comedy films of all time.

After Roxanne Martin has written novels and plays which I have bought and enjoyed tremendously and in the last ten years he’s developed into one of the top blue grass musicians playing banjo. The downside is that this has led to him rarely making movies.

Steve Martin after being an out and out comedian for twenty years up until Roxanne said this about his experience “I felt something afterwards that I had never felt in my career, which was respect. You know when you’re a comedian you’re like very funny but it’s not regarded and it’s not respected. It’s like people who look at a de Kooning painting and they go ‘Well my kid could do that’, I’m talking about people who don’t know about art. But then when they see that he could actually do extremely fine realistic drawings they go ‘Oh he has talent’. Roxanne proved to the world that Steve Martin had a wealth of talent that continues to entertain and surprise to this day.