“You’ve taken your first step into a larger world.”

I’ve always loved movies. In 1978, when I was four years old, my parents took me to see Star Wars at a cinema in Paignton, Devon and I was hooked.

In the late 70s my dad indulged my love of sci-fi, superheroes, and spies and I was taken to see Star Trek: The Motion Picture, Battlestar Galactica, Superman, and Moonraker at the ABC in Nottingham back when certification was more lapse and intervals featuring tubs of ice-cream with wooden spoons were the order of the day.

In the 80s I continued to go irregularly to the cinema; usually my mum would be the one to take my brother and me to enjoy the latest fantasy offerings.

The ABC and Odeon in the City Centre (sadly both long gone and demolished) were the main cinemas but we also went to the Byron in Hucknall (sadly no longer a cinema but more on that in a later blog) and thoroughly enjoyed each film and the entire cinema experience.

We didn’t go that often and I don’t know if it would be considered sad but I can actually list each film I went to see and I think it’s a pretty good mix:

The Empire Strikes Back, The Dark Crystal, Return Of The Jedi, The Smurfs and the Magic Flute, Pinocchio, E.T: The Extra Terrestrial, Return to Oz, The Spaceman and King Arthur, Ghostbusters, Ghostbusters II, Star Trek V: The Final Frontier,

If I ever question my mum about any of these films the only one she remembers is “the weird one with those puppets; they made me feel ill!” the rest she ascertains that she fell asleep during.

The advent of the video recorder and the video rental store made the cinema less necessary and film more accessible on a regular and cheaper basis for our family. The list of films we rented out goes on and on and I may write something about the joy of VHS at a later date.

“Next Saturday night, we're sending you back to the future!”

Another event occurred in my classroom that helped to put wheels in motion. As stated previously I like to show my class old films as a treat and the one I particularly love to play (due to its hero’s quest plot, female lead, and literary influences) is Labyrinth. My current class is made up of children I taught two years ago and some who are first timers. One of the ‘Old gang’ asked if they could watch “ that film with the goblins and the labyrinth” again this year, which was met with half of the class agreeing they’d like to see it again and half saying they had never heard of it.

The two events might seem unconnected but it got me thinking about how stories are passed on to the next generation. I read classic stories to my class, we encourage children to read books we enjoyed, could it be that parents weren’t doing the same with films? Could it be that some of these films that I’d loved so much and had influenced me were being forgotten?

I began to think it would be great if the Geek Force had monthly film nights to review a film that was thirty years old in 2016 and write a blog about it or film a discussion about that particular movie and why we loved it, get people to contribute their responses, and pledge to pass it on to the next generation.

The thought of watching the films again as a group was very appealing but something was nagging at me. Growing up I had seen many of the films I’ve mentioned on VHS on a small screen at home. I began to wonder what they’d be like on a cinema screen.

This idea has now turned into a reality.

We are lucky enough to have an independent small cinema in Nottingham. Screen 22 is 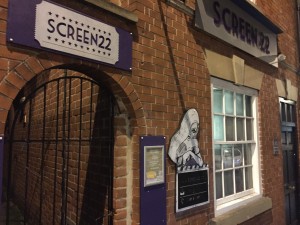 situated in Hockley, in the Creative Quarter. It’s an intimate, friendly, venue hosting a state of the art cinema with 22 (extremely comfortable) seats and a 7.2 sound system. I approached Amy, the owner, with the concept of a monthly film night where we donate profits to charity. I felt very strongly that the charities we selected should be children’s ones as these were films from our childhood that we wish to revisit and pass on.

Thankfully she loved the idea as she also loves the films that we selected. The only catch is that we can’t advertise which films we are showing as this harbours additional costs. However this has been to our advantage as we can use picture clues. In effect it has made it a ‘magical mystery cinema’ and part of the fun is for people to guess which films the next will be and whether they were correct.

“Should you need us, for any reason at all…”

The first movie night was on February 17th. We had selected a film that at least half my 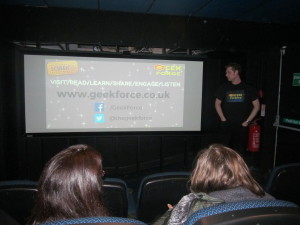 class would’ve loved and that was always going to be the first that we screened; the events of early January made it even more poignant.

We opened to a small but very receptive and appreciative audience, we hope that this will grow through word of mouth.

The format is simple: cinema goers enter the auditorium with music relevant to the film playing in the background, we have a brief introduction to the film with some facts about its conception, production, cast, etc, we then have some classic trailers teasing what may be to come at future screenings…or may not, we watch the film, and then we discuss it (either at the cinema itself or a nearby bar/pub).

The entire concept is: that we bring together people through film, that it isn’t an isolated 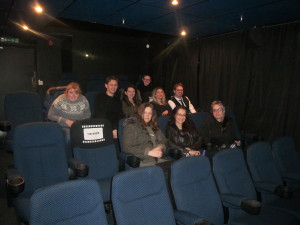 experience, that we share thoughts and feelings about that which we have watched, that we get to meet new people and make new friends through a common interest, we raise money, we pass these stories on, and that we have fun.

It’s my belief that the power of film and the power of story do these things. The Geek Force was founded on the principals of: community, passion, discussion, and heritage.

What were your favourite films from 1986 and why? Let us know.

If you are interested in attending any of our 30th Anniversary Film nights then please add yourself to the events page and invite friends.