Do you remember the band Collapsed Lung? Now I’m sure there will be a divide between the people who will say: “They were great and never got the praise they deserved in the saturated indie market of the 90s, and should have done a lot more.” Then there will be the people who will say: “Who are they?” And to those people who say who are they? – Shame on you. But even if you don’t know the name you will know one song that was played on every football tournament show from the mid to late 90s. That song is Eat My Goal.

“Oh yeah I know that song!” I hear you say. Of course you do and shockingly you don’t know more. 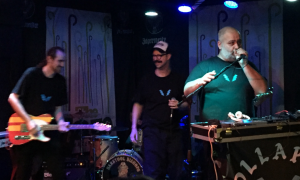 their presence. The crowd that made their way to the Maze on Mansfield Road to see them were in for a treat.

There were three support acts, with the lively folk/rap IBC (Itty Bitty Committee) starting proceedings, followed by comedy/ukulele/Hip Hop performer Edi Johnston who needs to be seen as he’s wonderfully entertaining. The final support act were the masked duo of Revenge of Calculon on synthesizer and bass. To begin with I was dubious that they were trying to be Nottingham’s answer to Daft Punk but by the end of the set I was won over and so was the rest of the crowd.

It was now 10:30pm and the night was just about to start for the main event – Collapsed Lung started setting up on stage. No roadies just the members of the band and then they properly took to the stage introducing new song ‘New Song, Old Band’.

New songs!? Something I wasn’t expecting. 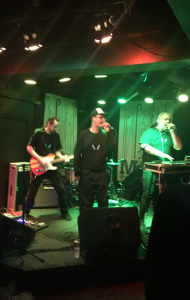 with tracks including London Tonight, Lungs Collapse, TV is Life, Elvis, and of course the crowd pleaser Eat My Goal.

Throughout the show everyone was on their feet bouncing along to the songs. One group of four men had followed them from the previous night’s show in Telford – obsessive fans? Stalkers? Who knows, but they were enjoying themselves.

The band played four new songs and were selling the vinyl record of New Song, Old Band and Let’s Get Jobs after the show. Technology may have moved on from the 90s though as Anthony Chapman had his IPad rigged up to his mixing desk and on the new song Garage Flowers he read the lyrics from his mobile phone (after they had finished he said that he wasn’t being antisocial he’d only had the lyrics WhatsApped to him by Jim Burke a few days earlier!)

The show was nearly over and after performing Eat My Goal they ended with two new songs; the aforementioned ‘Let’s Get Jobs’ and then a slower number ‘We’re Artists’. The crowd erupted at the end and we had witnessed an old band with magic songs. It was nearly midnight and after buying the new songs on the vinyl record and chatting with Anthony about what was next – the new album should be out this time next year – so be

patient Lungatics, the next album should rightfully put Collapsed Lung in a bigger arena where they should have been twenty years ago. We went home very happy, having had a fantastic night.