I always struggle to answer when anybody asks me my favourite of any movie, genre, book, author etc. However, this comedy show is definitely my all-time favourite.

Dad’s Army is a classic sit-com featuring the weekly escapades of a bumbling and mismatched British Home Guard unit during World War II. It was broadcast by the BBC from 31st July 1968 to 13th November 1977 and was written by the brilliant duo of Jimmy Perry and David Croft. 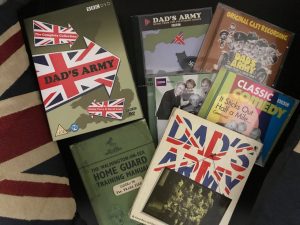 It’s hard to believe that this series has been on our screens for 50 years and continues to be a huge success with a massive international fanbase.

Over the nine years it was broadcast, eighty episodes were produced, a stage show, a radio show based on the television series, and a feature film as well as mini-sodes and specials that featured in various other shows. There was even a sequel radio show set after the war called It Sticks Out Half a Mile that ran for 14 episodes.

The television series had a viewing audience totalling 18 million on a regular basis and is still repeated worldwide.

In recent years a new movie was filmed (with a new cast recreating the original characters) and enjoyed box-office success.

I have loved the show since childhood – even then it was being repeated – and have very fond memories of watching it with my Grandad.

He had served in WWII, very rarely spoke about his experiences, but Dad’s Army was often a way of getting him to talk a little bit about the war. He didn’t find the show offensive or in poor taste and it was something we enjoyed together. That early experience of sharing a programme that crossed a generational gap was important for me and I feel sure that other people my age can recount similar feelings. I found out quite a lot about the war, and about the period generally, from the show by questioning my grandparents about 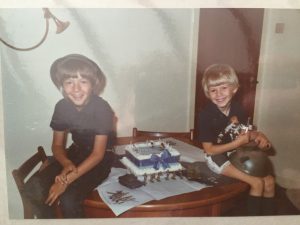 Bizarrely, we also played Dad’s Army in the playground at primary school. I can remember myself, my brother, and friends Christopher Brown, Robert Hewes, Robert Thomas, Chris Haywood and Iain Yates taking on the different parts and acting out scenes from the show as well as improvising our own roleplays.

We also wrote a Dad’s Army play which we performed on stage at the end of the school year for the Summer Talent show! I had been bought a Dad’s Army script book on a day out to Sutton-on-Sea and this had been invaluable in writing our own - I can only apologise to Perry and Croft for our version!

“I CAN'T COME HOME NOW MUM, WE'RE LEARNING HOW TO BE SOLDIERS.”

Dad's Army was based partly on co-writer and creator Jimmy Perry's experiences in the Local Defence Volunteers (LDV, later known as the Home Guard) and it’s a testament to Perry and Croft’s writing that the sit-com was still very accurate in aspects of its portrayal of the era.

I do think that for these reasons I developed a fascination for the 30s and 40s that has continued into adulthood. As a primary school teacher, World War II has always been my favourite topic to teach and it always amazes me how many children cite it as their favourite topic too.

Part of this is familiarity; the period is far enough removed from us for us to want to explore it but has also got enough similarities that we have an understanding already there. In the case of the show it also includes the human element that keeps us coming back – ordinary people in extraordinary situations.

And that for me is the most important aspect of the programme. The ensemble cast are simply amazing. The actors’ performances are consistently wonderful, and you can see and sense a genuine love for the material they are presenting and a genuine camaraderie that develops as the years progress. Without this I doubt that the programme would have been such a hit.

The main core of Mainwaring, Wilson, Jones, Frazer, Walker, Pike and Godfrey are the heart of the show. The genius of the casting is that the actors portraying them are exaggerated versions of themselves and conform to stereotypes that work as shorthand – we can relate immediately to them and we can recognise them without the need for any backstories. Although there is little character development over the course of the nine series we do gain some insights into what makes them tick and we do feel a sense of attachment to them.

"WE HAVE AN INVALUABLE WEAPON IN OUR ARMY, INGENUITY AND IMPROVISATION.” “ THAT'S TWO.”

It's a credit to Arthur Lowe, John Le Mesurier, Clive Dunn, John Laurie, James Beck, Ian Lavender and Arnold Ridley that we are still watching and talking about the show half a century after its first broadcast. 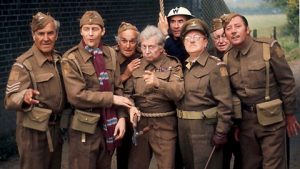 Their characters have also become synonymous with certain catchphrases; “We’re doomed, doomed!”, “Do you think that's wise, sir?”, Don’t panic! Don’t panic!”, and of course “Stupid Boy!” are all instantly recognisable and have stuck in the public conscience.

Each time I revisit the show, each time I catch a repeat on TV, I feel like I am spending time in the company of old friends and that’s no bad thing. It’s very comforting and it takes me back to when I was a child watching it with my family.

The series is also very good at pulling at the heartstrings and making you feel for the characters. It is no easy feat to get a balance between verbal humour, slapstick, pathos, sentimentality, and historical accuracy but Dad’s Army does pull it off on a regular basis.

There are three in particular that spring to mind. The first is the Christmas Special My Brother and I when Mainwaring's drunken brother Barry arrives in Walmington-on-Sea claiming that their father's pocket watch, held by Mainwaring, belongs to him. Mainwaring gives him the pocket watch to pacify him, but Barry gatecrashes Mainwaring's party for local dignitaries and wrecks it (a great dual performance from Lowe). In Branded, Private Godfrey admits to having been a conscientious objector during the Great War, he is called coward, sent home in disgrace and ostracised by the platoon. When he saves Mainwaring's life, it emerges that he holds the Military Medal for bravery under fire as a medical orderly. And finally, Mum’s Army when Mainwaring allows women into his platoon but rumours begin to circulate that he has become personally involved with one of the new members. Fiona Gray, the love-interest for Captain Mainwaring, was a role especially written for Carmen Silvera by David Croft.

And lest we forget, the humour is timeless. Silly situations, slapstick, verbal interplay, some risqué lines and double entendres – naughty postcard, end of the pier stuff, which is appropriate as it is set in the fictional Walmington-on-Sea. It’s a comedy that any age group can enjoy and it’s a comedy that can be enjoyed together as a family.

“WHO DO YOU THINK YOU ARE KIDDING MR. HITLER, IF YOU THINK WE'RE ON THE RUN?”

And we can’t forget the theme tune, "Who do you think you are kidding, Mr Hitler?" was 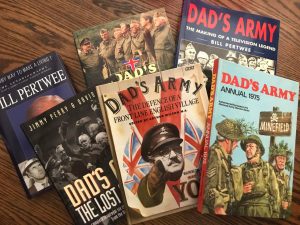 Jimmy Perry's idea, intended as a gentle pastiche of wartime songs (other music used was contemporary to the 1940s). Perry wrote the lyrics himself and composed the music with Derek Taverner and then persuaded one of his childhood idols, wartime entertainer Bud Flanagan, to sing the theme for 100 guineas. Flanagan died less than a year after the recording. At the time it was widely believed to be a genuine wartime song! The song, combined with the opening animated sequence of swastika-headed arrows approaching Britain, is now iconic.

Ultimately there isn’t just one single thing that has made Dad’s Army the enduring success that it has become; it is a combination of all these elements that has allowed it to become a timeless classic that so many people have embraced and taken into their hearts and passed on to their children too.

I have no doubt that the show will continue to be watched, passed on, and loved by future generations and that someone in the distant tomorrow of 2068 will be looking back at the appeal of a century old TV show and writing a blog about its longevity.