It is hard to believe that it is 35 years since Keith Floyd exploded on our screens with Floyd on Fish on the 14th November 1985. It made an overnight superstar of Floyd and although there had been cooking programmes pre-dating this from the 1950s, with the likes of Fanny Craddock and the Galloping Gourmet, this series took cookery into new territories and with its flamboyant presenter set the template for all cooking programmes that followed.

Keith Floyd was born on 28th December 1943 in Sulhamstead, a village in West Berkshire. He came from a working-class background and due to him falling ill and missing a large portion of his final year at primary school his parents took the decision to send him to public school for his secondary education. This was probably the making of Keith Floyd as from leaving school he became somewhat of a chancer, living above his means, borrowing money from friends and falling on his feet with one job after another.

His career began as a reporter for the Bristol Evening Post, where he worked alongside 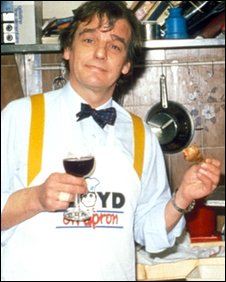 Tom Stoppard before he became a great playwright. From the public school and journalism came his love of fine suits, shoes and bowties. He left the newspaper after a few years and joined the army for another few years before once again changing path. This was to become the way of Floyd - until his TV career - he would get bored with a job and quickly move on.

After the army, he decided to be a chef and worked in various restaurants and hotels to learn his trade. By 1971 he was confident enough to open his own restaurant; Floyd’s Bistro in Bristol. This led to establishing a further two restaurants in the area whereupon he became bored and burnt out, left his wife and child, and went sailing for a few years. He also lost a lot of money by letting someone else invest in one restaurant and was hoodwinked into transferring his half of the restaurants into their name. He then worked in another restaurant, started a wine importing business and then moved to the South of France where he opened a restaurant in L’Isle-Sur-la-Sorgue in the Vaucluse. This is where he said he really learnt to cook. However, he soon hit financial problems and moved back to Britain.

He once again set up another restaurant, another Floyd’s Bistro in a different part of Bristol. This was frequented by actors and television producers and it was here that he had his first foray into TV and radio. He first became a radio chef on the independent station ‘Radio West’ in Bristol, and it was during this time that TV producer David Pritchard noticed something in the flamboyant Floyd resulting in him being given a slot on a West regional TV programme ‘RPM’.

CLIVE A BIG FAT CLOSE UP PLEASE, NO NO DEAR BOY NOT THE CHIPS, THE CHIP PAN GOT IT? THANK YOU

Floyd’s first full TV series, which was the brainchild of Pritchard, was well-received and led to the change in culinary programmes. Floyd on Fish was an overnight success and made Keith the rock ‘n’ roll chef with his on-screen drinking of a “slurp” of wine, his telling off of Clive the cameraman to film the dish not him! Keith believed the food was the star of the show and people were there to see how to cook these dishes. It was made all the more approachable though with this eccentric presenter. 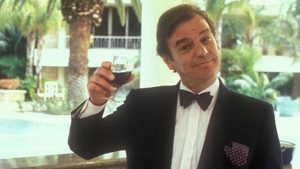 Floyd is like marmite: you either love him or hate him. Most, if not all, of the series was adlibbed by Keith on the spot and a lot of the cooking segments were in unusual places, indeed throughout the many series the locations from where he cooked just got weirder! Floyd and the TV crew had a tendency to approach a kitchen, restaurant, or even someone’s house, either a few days prior to filming, or a day before filming, or even on the actual day of filming, and ask if they could use the venue to make the show – surprisingly not many refused the, even at such short notice. In the first series, a young Rick Stein is filmed with Keith in his restaurant cooking fish. When the partnership of Pritchard and Floyd had soured in the mid-90s, David Pritchard went on to make many cookery programmes with Rick Stein and made him the TV celebrity he is today.

David Pritchard’s genius was in taking cooking out of the television studio and filming the creation of dishes in various outside locations, for example: in real kitchens, in restaurants, on-board ships and on fast-moving trains. Floyd was equally happy cooking in foreign market squares and piazzas to a crowd of people, or in the middle of nowhere with only the crew. Equally, he wasn’t phased by being surrounded by ostriches in Floyd on Africa or by cooking in the middle of a flowing river in Floyd’s Fjord Fiesta. As Floyd said: “We really do wing it.” Floyd’s style of presenting was fluid, articulate, pomp and grandiose. He made cooking seem simple and something everyone should do. He talked to the camera like he was talking to a friend and coined the term ‘gastronauts’ when talking about the viewers. After a few series, he had developed a style of throwing pots and pans behind him when they weren’t required. It also had a brilliant soundtrack featuring The Stranglers’ Waltz in Black as the opening credits for most of the series that were produced.

I’LL HAVE A QUICK SLURP

I doubt that anybody involved in the first series of Floyd on Fish, including Floyd himself, imagined that the series would take off as it did. In all Keith made fifteen cookery series. The Floyd show developed from cooking in Britain to travelling all around the world, encompassing America, Australia, Asia, Italy, Spain and the Med. They developed from simply cookery programmes to cookery programmes with a travel-log. Floyd started to introduce different segments of his travels with a voiceover reading fake postcards to an imaginary friend. He would begin his faux travel-log with the words “Dear Hector”. Not only had Floyd taken cooking out the studio, but he had also gone global.

The partnership of Pritchard and Floyd went from the dream team to a nightmare, and by the time of the filming of ‘Far Flung Floyd’ in 1993, it had all fallen apart. Clive the cameraman had left before this series began and then the relationship between Pritchard and Floyd deteriorated. Floyd, always the prima donna, had got worse and Pritchard said he had created a monster. I think what caused the fallout was that Floyd believed that he was the show, and to a degree he was correct, however, Pritchard would recreate the 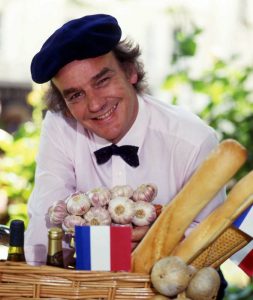 formula with Rick Stein. Whether Stein is as entertaining is purely down to personal choice but the success cannot be denied.

The lid goes on, and the beat goes on

After this Floyd went on to make further series for the BBC and then Channel 5 and for a foreign TV company. These were in the same vein and style that he had been doing from the early days. By 2001 he made his last series – Floyd’s Fjord Fiesta for a Swedish and Denmark TV company joint venture. He had had a good run but at this point, the young guns had copied his style and he had become old hat. By now Gary Rhodes, Gordon Ramsey and Jamie Oliver had started their successful series. Lots of other cookery programmes had come along including Ready Steady Cook which had made a whole host of celebrity chefs famous such as Ainsley Harriott and James Martin.

Floyd appeared sporadically on television shows after this and even had a one-man unscripted show which toured the British provinces in 2006/07 called Floyd Uncorked: The Life of a Bon Viveur. Unfortunately, Floyd passed away on 14th September 2009 on the night a documentary about him appeared on TV titled ‘Keith on Keith’, presented by Keith Allen who had also interviewed Floyd for the show. He was only 65 but after years of heavy drinking on screen and off, it had taken its toll and he looked very frail. 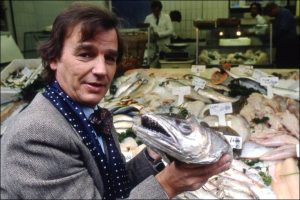 Keith Floyd, with the help of David Pritchard, was an innovator for television. Without the Floyd on Fish template set in the mid-1980s, we would never have had the likes of Jamie Oliver, James Martin, Gordon Ramsey and Nigella Lawson. Floyd was fresh, he said what he liked, he drank what he liked and he could cook a mean dish of anything. He might not be to everyone’s taste, he might not be the best chef, but he’s one in million and he set the standard for everyone else to follow. So please raise your glasses to Keith Floyd I think it’s now time for a quick slurp….