“THE WOLVES ARE RUNNING. PERHAPS YOU WOULD DO SOMETHING TO STOP THEIR BITE?”

I have vivid recollections of 1984, mainly because it was the year that I began secondary school.

It was a year that stands out in my mind as people kept talking about a certain book by George Orwell which at the time, even as a ten; soon to be eleven year old, seemed terrifying to me, it was also because it was a year in which there were some memorable events on TV.

Torvill and Dean won gold in the Sarajevo Winter Olympics (and I remember they had left from Jane’s parents’ shop on our road, with crowds bringing the ring road to a standstill), Peter Davison’s final Doctor Who story The Caves of Androzani was broadcast and his Fifth Doctor regenerated into Colin Baker’s Sixth, going straight into his first adventure with The Twin Dilemma, and I watched in confusion as comedian and magician Tommy Cooper collapsed live on television during ITV’s Live From Her Majesty's, dying from a fatal heart attack at the age of 63.

It had been a year that had seen a number of TV shows debut that vied for my attention. Saturday teatimes had consisted of Fraggle Rock, Whiz Kids, Automan, The Tripods and Robin of Sherwood (some of which I intend to look at in future blogs). I can also remember loving Manimal when it was shown on BBC1 on Monday evenings.

We had a summer of playing outdoors, creating adventures with Action Force and Star Wars figures, and a beach holiday that had been glorious sunshine all week.  I had even been allowed to stay up late each night for an entire week in the school summer holidays to watch sci-fi mini-series V which ran on ITV that year – I was probably too young to watch it but this was the 80s!

My last year of primary school soon came to an end and the summer holiday soon passed. The autumn term was a sharp learning curve for me as the comprehensive was so very different from the primary school I had left. It was a year of transition in so many ways.

Running up to the Christmas I recall that a number of fantasy films and shows were being promoted in newspapers, comics and television, and had sparked my usual geeky interest.

Both Gremlins and Ghostbusters were hitting the cinemas, and Transformers were hitting the toy shop shelves. As I recall my Christmas list was a real mixed bag (sack) which included a Gizmo figure, Decepticon Soundwave with Buzzsaw and the Palitoy Action Force Headquarters.

In the run-up to the Christmas holidays (for which I couldn’t wait), a particular fantasy television show had caught my attention, and my younger brother’s too, which was to be broadcast on BBC1 on Wednesday 21st November at 5 pm.

“IN MY BOX ARE SUCH DELIGHTS.”

The BBC’s The Box of Delights was a six-part adaptation of John Masefield’s classic 1935 children’s novel. The channel had promoted it quite prominently and trailers promised a special effects led story set in the 1930s and at Christmas, having magical and thrilling elements and, crucially for me as a fan of Doctor Who, Patrick Troughton (the Second Doctor and at that time my second favourite Doctor based on the very few episodes I had watched him in) as the enigmatic Cole Hawlings. 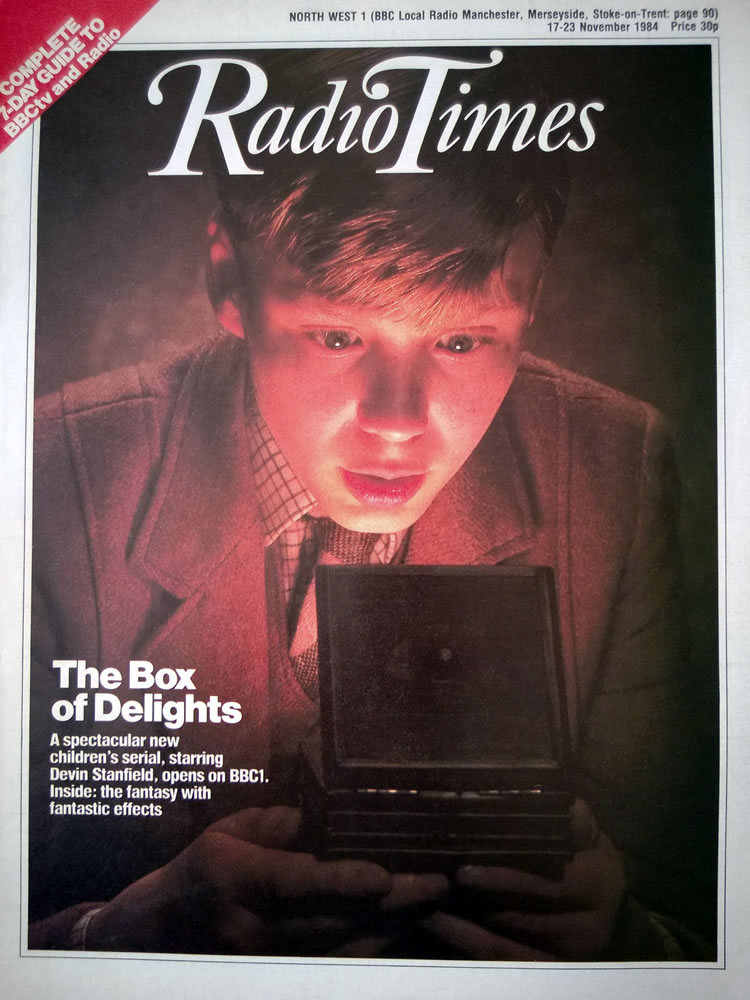 The Radio Times magazine for 17th -23rd  November 1984 devoted the whole front cover and several pages (John Craven’s Back Pages; who else remembers that?) to the series. I can remember reading those pages and deciding that it would definitely be a show that I’d be interested in, for me it seemed reminiscent of other BBC productions that I had enjoyed like The Phoenix and the Carpet and The Enchanted Castle.

To further whet my appetite on Monday 19th November Blue Peter would be featuring actors from the show. Janet Ellis met Devin Stanfield who played the main antagonist schoolboy Kay Harker, Simon Barry who played Mouse and, of course, Patrick Troughton himself (the feature connected Cole Hawlings to the actor's earlier role, observing that Troughton was once again playing a mysterious, scruffy time traveller). 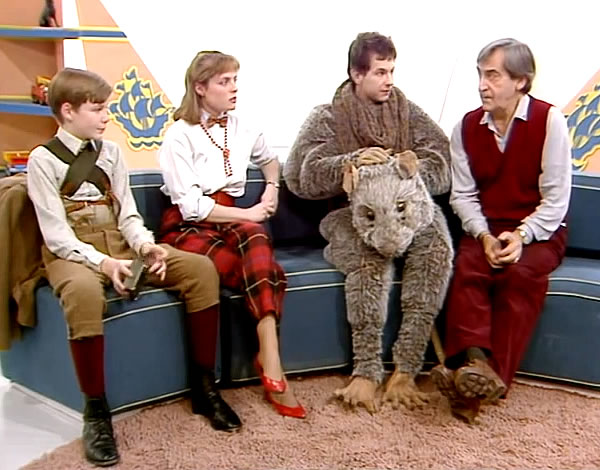 “THAT’S THE TIME THAT LIKINGS ARE MADE.”

And so at 5 pm on the Wednesday of that week, we (my brothers and I) tuned in to the first episode "When the Wolves Were Running..." and we weren’t disappointed.

From the opening titles; with images of the faces of a wolf, Mr Punch, a rat, a mouse, a Trojan warrior, Herne the Hunter, Abner Brown and Cole Hawlings appearing amongst misty, snowy, starry, swirling skies and the eponymous box rotating (bringing to mind the opening for Picture box) and to the closing credits; with its ominous cloudy skies and of course that wonderful eerie harp led theme music, which features an orchestral arrangement of "The First Nowell" extracted from the third movement of the Carol Symphony, evoking a music-box quality and also a certain menace, I was hooked. And like Doctor Who it left the audience on a cliff-hanger so I had to tune in for the next episode.

Since I bought the DVD release of the show it has become a tradition to re-watch it each year in the run-up to Christmas Day. One episode per week over six weeks, starting on the 19th November of every year, this allows the final episode to be viewed on Christmas Eve – just as it was broadcast in 1984. 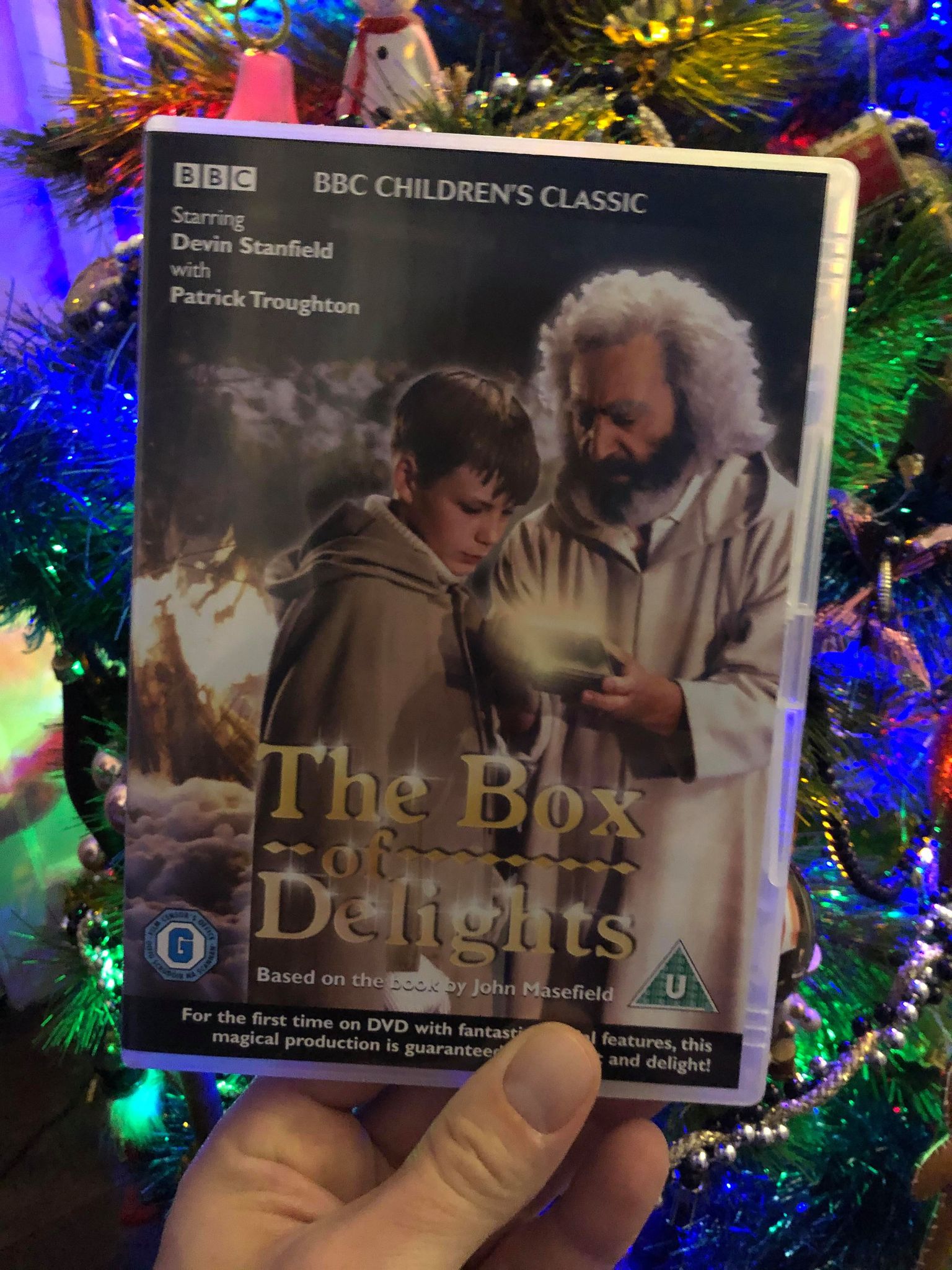 The story begins in a wintry 1934 England and Kay Harker is returning via train from boarding school to Condicote, and his home: Seekings House, for Christmas when he finds himself at the centre of a battle to possess a small magical box. The current owner of the box is an old Punch and Judy man called Cole Hawlings whom Kay meets at the railway station. Striking up a conversation in which the two connect, Hawlings confides that he is being pursued by an evil magician called Abner Brown (played by the wonderfully sinister Robert Stephens) and his gang, which includes Kay's former governess; Sylvia Daisy Pouncer (played by Patricia Quinn of Rocky Horror fame).

“KEEP THE BOX FROM THEM. ABOVE ALL, KEEP IT FROM THEM.”

The box contains old magic which allows the owner to go small (shrink in size), to shapeshift, or to go swift (to be able to fly), to travel to the past and to experience various magical wonders and creatures. Brown wishes to possess it for foul means. Hawlings, it transpires is an immortal medieval philosopher and alleged magician Ramon Llull, and he entrusts the box to Kay. The schoolboy, along with his friends the Joneses children: Jemima, Maria, Susan and Peter (played respectively by Heidi Burton, Joanna Dukes, Flora Page and Crispin Mairthen) embark on a series of perilous adventures, protecting the box and freeing Hawlings, choirboys and members of Tatchester Cathedral!

Along the way, Kay encounters many characters drawn from English folklore, history and pagan mythology including Herne the Hunter, King Arthur, Father Christmas, unicorns, Roman soldiers and medieval monks.  Interestingly the series features a recurring theme of paganism and Christianity intertwined, which comes directly from the book and is rooted in folklore. 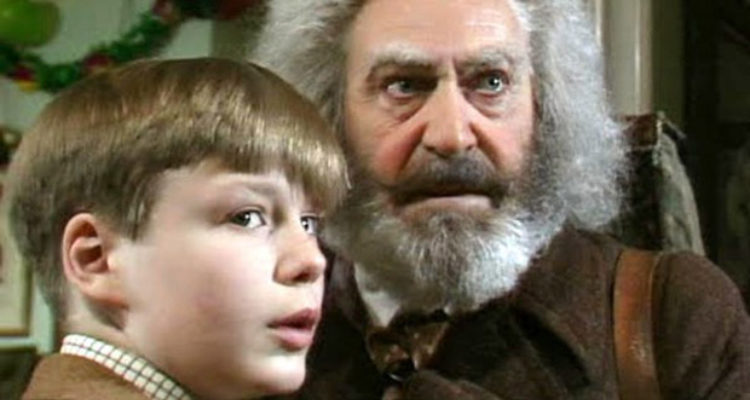 As an eleven year old, I particularly loved Troughton as Hawlings and was disappointed that he was not in more episodes but he leaves such an impression that he feels like he is in more. However, the villains make up for this. The opening scenes with conmen/gangsters  Foxy Faced Charles and Chubby Joe (performed with relish by Geoffrey Larder and Jonathan Stephens) dressed as clergymen and ripping Kay off at a card game on the train, set the tone for the rest of the series. Stephens’ portrayal of Abner Brown swings from seriously sinister and threatening to over-the-top pantomime villain which is absolutely spot-on for this drama. The twist that Abner’s own wife/associate (Sylvia) makes off with his jewels and Foxed Face Charles (with whom it is inferred she is having an affair) is signposted but was still a surprise when they successfully dupe him.  Stephens and Quinn did marry in real-life very briefly before his death in 1995.

I loved the elusive Herne, the reference to King Arthur, the disgusting, talking, human-sized rats with their penchant for green cheese and alcohol, the odd and unexplained Waterfall Boy and the talking Bronze Head, the bizarre encounter with the hermit, almost Robinson Crusoe-like, Arnold of Todi, the animated sequences that were ground-breaking for the BBC special effects department, the time travel aspects, the car/plane, the period setting and language such as “scrobbled” and “the purple pim”, the fact that the heroes of the piece were school children around my age, that fantasy and reality were bound together, and all set at a snowy Christmas time. It was pretty much a perfect mix.

The finale at first appears to be a copout with the “it was all a dream” ending but I saw this, and still see it, as an alternative timeline that did happen but was reset when Kay and Co. save Christmas. I think this is definitely inferred as we see the main characters and they acknowledge Kay, in that final sequence, with a knowing look.

“CHRISTMAS OUGHT TO BE BROUGHT UP TO DATE, WITH GANGSTERS AND AUTOMATIC PISTOLS AND AEROPLANES.”

In my opinion, the adaptation holds up really well and is every bit as good as I remember it being when I first watched it as an 11-year-old. I have had Year 5 and 6 classes watch it and they are always drawn into the story despite the dated special effects. It is a testament to the production and the performances that new audiences can so readily engage with a programme nearly four decades old. There is a strong mix of adventure, mystery, and danger, it doesn’t play it safe and it is artfully vague, it even makes references to Masefield’s prior story featuring Kay and Abner: The Midnight Folk, and doesn’t apologise for there not being an adaptation of that novel for the audience to view to make sense of said reference.

The first episode alone does not pander to the audience and it makes the viewer question what is happening. It never assumes that the audience is anything less than literate, that they have a decent attention span, and the ability to follow the plot, make connections and have leaps of logic. It does not talk down to the viewer and it demands that the viewer thinks. This is prevalent throughout the series and indeed for children’s drama of this period. 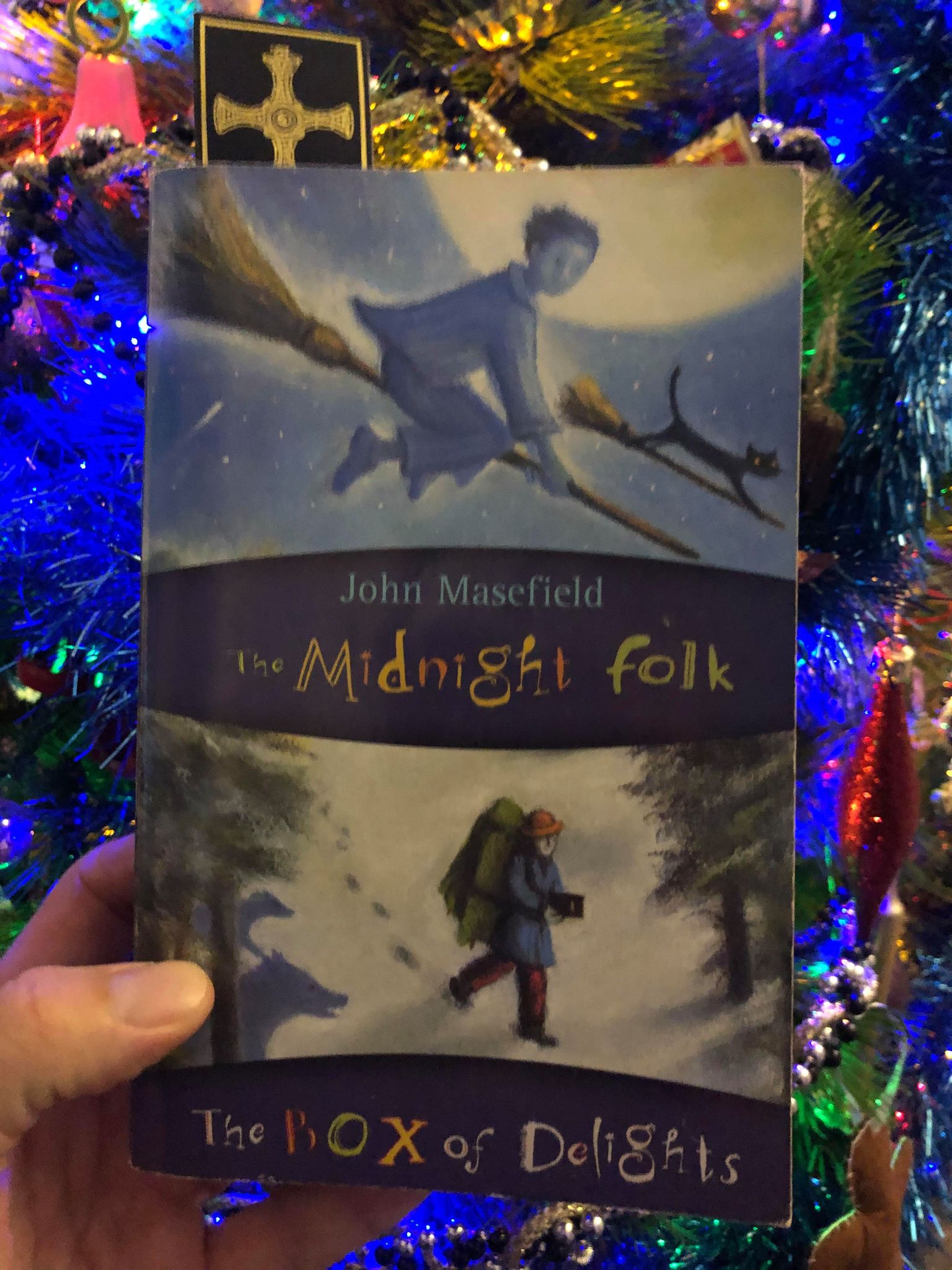 This year I finally got round to reading Masefield’s The Midnight Folk and The Box of Delights and am pleased to say they are every bit as bonkers and intriguing as the 1984 series.

It seems to me that Masefield set out to deliberately do this and in effect wrote the first original children’s adventure for the 20th century. I’d argue his presence can be felt in the works of C.S. Lewis, Dahl, Rowling and Pullman to name but a few.

“TIME AND TIDE AND BUTTERED EGGS WAIT FOR NO MAN.”

Re-watching the show always transports me back to a particular time in my childhood and the memories associated with it. Reading the novel over this time of uncertainty I have been able to see what a transitional novel this was, and I have reflected on what a time of transition it was for me as a child back in 1984 and also how this has mirrored the transition I have experienced over this very strange year, one I am sure others have felt quite acutely too.

Have I learnt anything from the story? I have gleaned any new perspectives or insights that I had hitherto not realised? Perhaps, but mostly the reaffirmation that faith, belief, determination, values and community can drive back darkness and help us to make a transition from the end of one era and into a new, different and brighter future.