“I FEEL THE NEED…THE NEED FOR SPEED.”

“On March 3, 1969 the United States Navy established an elite school for the top one percent of its pilots. Its purpose was to teach the lost art of aerial combat and to insure that the handful of men who graduated were the best fighter pilots in the world. They succeeded. Today, the Navy calls it Fighter Weapons School. The flyers call it: TOP GUN.”

Right from the opening title card and Harold Faltermeyer pulsing soundtrack I just knew this was going to be a great film.

Like many films during the 80s I didn’t see Top Gun on the big screen, but on VHS at the youth club that we used to descend upon en masse in Bulwell on Friday nights. I’m guessing this must’ve been in 1987 as films tended to take a while to see the light of day in a rental store back in the day.

For a 13 year old boy this film had everything, a great soundtrack, plenty of action, aerial dogfights, rivalry in the air and on the ground, camaraderie, witty dialogue, a 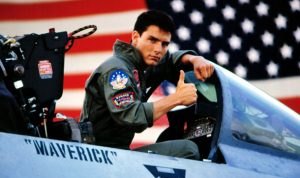 hot female love interest, loss, and the guy every guy wanted to be; and every woman wanted to be with – the rebellious, hot-headed, hotshot - Maverick.

My love of Action Force/GI Joe toys at the time no doubt helped me to be immediately hooked by the film and I can remember recreating Maverick’s “inverted finger” manoeuvre with Ace’s Skystriker against Wild Weasel’s Rattler on many occasions.

“I GOTTA GIVE YOU YOUR DREAM SHOT! I'M GONNA SEND YOU UP AGAINST THE BEST. YOU TWO CHARACTERS ARE GOING TO TOP GUN.”

And so this is another film that reaches a milestone anniversary this year. Top Gun is 30 years old. I re-watched it (again) in its entirety recently and I’m pleased to say that, in my opinion, it holds up really well. The stars of the movie look very young – particularly Cruise who was only 24 when he took on the role that made him fully-fledged Hollywood hot property.

The characters and plot maybe clichéd (comedian Rich Hall’s routine about all Cruise films is always in the back of my mind when I watch it) but Cruise, as LT Pete "Maverick" Mitchell, and Edwards’, as LTJG Nick "Goose" Bradshaw, relationship in the film and their likeable performances win through every time. 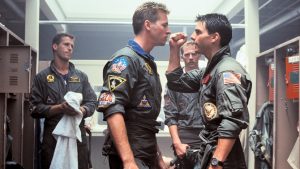 And what a cast!

A great mix of up-and-coming stars, who went on to varying degrees of success, and 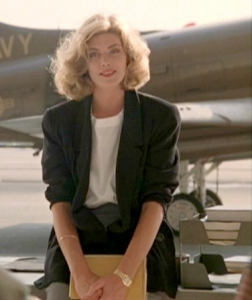 established actors who act as the elder statesmen, keeping the younger characters in check, and offering their sage advice and wisdom.

And who could forget Kelly McGillis as Charlotte "Charlie" Blackwood? She provides the emotional crutch and linchpin that the film requires. Her character is in equal parts incredibly intelligent and incredibly sexy. She smoulders in this role.

“SON, YOUR EGO IS WRITING CHECKS YOUR BODY CAN'T CASH.”

It surprises me just how much of the movie is dialogue driven, by today’s standards this is not an action packed action film. Again the relationship between the characters is the main draw. I can remember being absolutely shocked that Goose died the first time I watched it.

As an adult watching it the impact is no less shocking as it seems such a hollow death but is necessary for Maverick to question his risk-taking ways and re-evaluate what being the best really means.

Ultimately maverick overcomes his guilt and the story is resolved by the burying of hatchets with Iceman and a reunion with Charlie. It’s a great Hollywood, feel good, ending.

“REVVIN' UP YOUR ENGINE, LISTEN TO HER HOWLIN' ROAR.”

The soundtrack was equally as successful as the movie and I think it was influential on a slew of soundtracks that followed in the late 80s and early 90s.

The formula can be seen in so many from that point on. Well known current artists, some 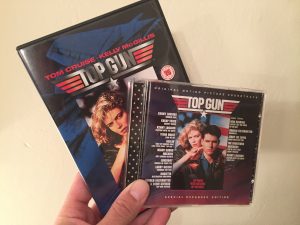 music from the film, and most importantly a power ballad vying for the number one position in the charts.

Without Top Gun’s soundtrack, and Berlin’s Oscar winning song, would we have had the chart friendly anthems of Dirty Dancing, Ghost, Robin Hood: Prince of Thieves, The Bodyguard, or Titanic?

In the UK Take My Breath Away hit the top ten twice – at number one on its release in 86 and then at number three as a reissue in 1990 to coincide with the first television showing of Top Gun (by ITV, on the evening of October 6).

Personally I love Kenny Loggin’s contribution to the album. When Danger Zone kicks in during the opening sequence of the movie it immediately sets the right tone for what is to follow.

The soundtrack in itself has been re-released and expanded. I always think that its genius was the inclusion of older songs that enjoyed new interest from a younger audience who, in some instances, were hearing them for the first time and wanted to find out more about these artists.

The Righteous Brothers in particular enjoyed a reappraisal and new chart success when they were then included in this and the Ghost soundtrack.

“YOU CAN BE MY WINGMAN ANYTIME.”

Its been reported for some time now that a sequel to the original could be in the offing and that Cruise and original producer Jerry Bruckheimer  have wanted to do a sequel for a long time three decades.  Tony Scott’s (the director of the original) suicide seemed to put an end to this but recent talks may yet see Maverick return as a Top Gun trainer putting the next generation of ace pilots through their paces.

There is no ETA but I for one hope this sequel will finally take flight and soar onto the cinema screens soon.