Through early morning fog I see

It was sad to hear the news that Wayne Rogers, best known for playing “Trapper” John, had passed away on the 31st December 2015. MASH had been a big part of my childhood.

I first heard of MASH in 1987 or 1988, I can’t remember which year. But I would have been 10 or 11 at the time. I did say heard about MASH, as it was my elder brother who told me about it, I didn’t see an episode for a while. Gary would tell me about a few different series that were on after my bed time; Moonlighting and Cheers were two others. 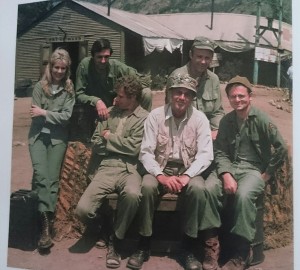 telling me about MASH. The episode was where they made a film and the main character, Hawkeye, was like Groucho Marx. This episode I later learnt was Yankee Doodle Doctor and it was only the 6th episode of series one, which I would see years later. He’d then tell me stories of every episode. It was a whole world that I loved to hear about.

Another episode I remember Gary telling me about was where Hawkeye and Trapper are playing a board game they’ve invented called Wacko and then later in the episode Double Wacko. We would make our own version of this game involving playing cards, a snakes and ladder board and monopoly money.

A brave man once requested me

I loved the sound of this TV series and the characters in it. When we played Double Wacko Gary would be Hawkeye and I’d be Trapper. I’d not even seen the series but understood 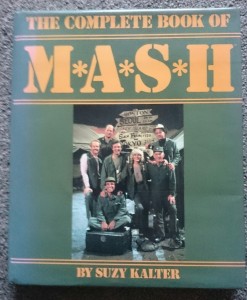 What drew me to this series was that it was comedy and it was set in the army. Two things which when myself and Gary were young we loved because of Action Force/G I Joe and all those war films we used to watch when we were little. I remember Gary and his friends putting on a performance of one of the Dad’s Army episodes at primary school, and us all playing Dad’s Army in the playground. Yes that does sound strange; imagine seeing 5 to 9 year olds play Dad’s Army at school now, I can’t imagine that happening.

MASH was shown every Wednesday at 9pm and my bedtime was before that. But I finally watched episodes one summer holiday. They had a double bill of them on. The episodes I saw were “Abyssinia, Henry” and "Welcome to Korea". These were strange episodes to watch as these were the last ones with Colonel Henry Blake and Trapper in them. So as soon as I started watching it there were character changes and Colonel Potter and BJ Honeycutt came into it.

The game of life is hard to play

I did have a love for MASH and I remember in my first year at secondary school that they showed the Robert Altman MASH film on TV. I didn’t know anything about this but it was an introduction to the characters but with none of the cast from the series in it apart from Gary Burghoff who played Radar O’Reilly. 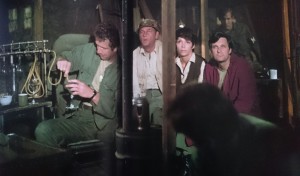 I found out that the film was a forerunner to the series. The shack that Hawkeye and Trapper lived in was called The Swamp. I remember that Gary made me a sign for my bedroom which said The Swamp – MASH 4077.

I later found out that the film made stars of the cast, none of them I knew before watching the film. Donald Sutherland, Elliot Gould, Tom Skerritt and Robert Duvall all became stars and are in some of my other favourite films. But this was my introduction to them. Robert Altman followed his directional debut film with The Long Goodbye staring Elliot Gould as Philip Marlow which is a fantastic film with brilliant performances, a worthy follow up to MASH.

The cast of the series all became stars of the small screen. Alan Alder who played Hawkeye became the most recognisable and appeared in a few Woody Allen films in the late 80s and 90s.

about 14 and I watched the hour long last episode. It was strange to finally see this finish. Even though it finished by 1983 originally I’d watched this rerun as though it was the first time it had ever been on.

I think they had about a 6 months gap and started reshowing every episode again from series one so it was good to see the first three series as I’d not seen them before, all those episodes that Gary had told me about 7 years before. I finally got to see a lot more of Wayne Rogers as "Trapper" John McIntyre.  As a side note there was a weird spin off series about “Trapper” called “Trapper” John MD. It’s set nearly 30 years after MASH and is about Trapper working as a surgeon in a hospital. I’ve never seen this and it doesn’t sound that interesting but it did run for 7 series. However it didn’t star Wayne Rogers as Trapper.

And I can take or leave it if I please 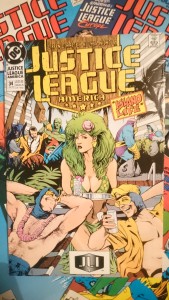 record of Suicide is Painless by Johnny Mandel, this is a brilliant song, and piece of music, and adds to the film and the series. I also used to get the Keith Giffen Justice League DC comic, while most of DC had gone dark, because of Bat Man Year One and the Dark Knight Returns, Giffen took Justice League in a comedy direction. One story line was where Booster Gold and Blue Beetle bought an Island, Cooy Cooy Island, and the front cover had the two of them looking distinctly like Hawkeye and BJ on the cover.

I have never lost my love of the show or film and for anyone who’s never seen it then I recommend that you watch it, preferably without the canned laughter.