"Rebellions are built on hope."

Since reading the official synopsis from Disney earlier in the year my expectations were high, as were my hopes: "Following the foundation of the Galactic Empire, a wayward band of Rebel fighters comes together to carry out a desperate mission: to steal the plans for the Death Star before it can be used to enforce the Emperor's rule."

I had enjoyed 2015’s The Force Awakens immensely but had some reservations about the story repeating aspects of the original 1977 blockbuster that as I’ve stated in previous blogs shaped much of my love for all things sci-fi. http://www.geekforce.co.uk/films/long-time-ago-galaxy-far-far-away/

Having recently watched Rogue One I can say that my expectations and hopes were exceeded. This was the Star Wars movie I was looking for! 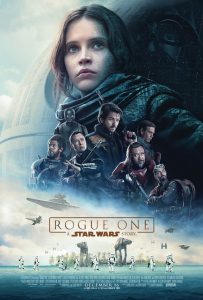 her father, research scientist Galen Erso (Mads Mikkelsen), is taken, against his will, by Imperial Director Orson Krennic (Ben Mendelsohn) to complete the design of the Death Star.

The action moves forward thirteen years with a defecting Imperial pilot, smuggling a message from Galen for the Rebel Alliance. The now adult Jyn (Felicity Jones) is freed from the Imperials by the Rebellion, who plan to use her to track down her father, then assassinate him to prevent the planet destroying weapon from being built.

From the moment Rogue One began I was hooked and felt like I was 10 years old again. Gareth Edwards and co. should be congratulated on creating a hugely satisfying film that delivers for old and new fans alike.

So why is this, in my opinion, such a triumph? Is it simply because it harks back to the period and aesthetics that I grew up with from the original trilogy?

Well partly yes, of course. The Star Wars universe is huge and diverse, as can be seen in all of the other films in the series – this has always been the draw for me. The genius of Rogue One is the fact it is set just prior to the first movie (almost Episode 3.5?) and expands and adds to the original story using a mixture of never before seen faces and places and some of the existing characters and situations. The clever part is that this mix creates its own unique identity. It is a genuine prequel to A New Hope.

"The power that we are dealing with here... is immeasurable."

The awesome talent, headed by Felicity Jones, brought to my mind the ensemble casts of such classics as The Great Escape, The Magnificent Seven, and The Dirty Dozen.

Diego Luna plays Cassian Andor (a Rebel Alliance Intelligence officer) as a man of principles who has had to commit questionable acts for the Rebellion, there’s a great double act from Donnie Yen as Chirrut Îmwe, a blind warrior who believes in and has a connection with the Force, and Jiang Wen as Baze Malbus, a Rebel warrior, mercenary and his best friend. Riz Ahmed’s role as Bodhi Rook, a defecting Imperial pilot, is understated but equally necessary to the line-up.

A special mention must go to Alan Tudyk as the voice and motion-capture of K-2SO (a Rebel-owned Imperial enforcer droid), his performance easily rivals that of Anthony Daniels as our favourite golden rod!

My only criticism would be some wasted opportunities in terms of veteran rebel Saw Gerrera. Forrest Whitaker is woefully underused and serves little more purpose than moving the plot forward. A shame as the character deserves more screen time.

The film delivers on special effects. It’s great to see animatronic characters that are CGI enhanced rather than fully CGI. I personally salute Disney for this move – in my mind a physical creature, droid, etc that is really interacting with actors always beats one that has come out of a computer – with few exceptions.

This same rule applies to physical sets. The film looks so much better for real settings rather than pure digital backlot. The amalgam of the two really does make the movie look spectacular.

What was fantastic was the unexpected cameos from characters, vehicles, places, and objects featured in previous Star Wars films (and Rebels – a series that if you haven’t yet watched it, you need to do so). It’s a nod to the old fans like myself but aren’t obtrusive or shoehorned in to please the fanboys. Such appearances feel natural rather than contrived – a real testament to the script written by Chris Weitz and Tony Gilroy (from a story by John Knoll and Gary Whitta) and the direction of Gareth Edwards.

I certainly feel that this movie will demand, and stand up to, repeated viewings.

Some fans may find it odd not to have the opening crawl and the famous William’s music to start the proceedings but for me Michael Giacchino soundtrack’s strength was that it forged its own path and surprised, whilst using the well-loved theme sparingly and respectfully in context. This Star Wars film set its stall out from the start and makes it clear that it is a stand-alone whose genetic make-up borrows from, but adds to, the saga as a whole.

"I'm one with the Force. The Force is with me."

Rogue One has been the best Christmas present that many Star Wars fans could’ve asked for (it’s definitely been a highlight of the festive season for me). As I’ve already said: I liked The Force Awakens and it didn’t disappoint me. However, Rogue One blows that film out of hyperspace. This is a film that will appeal to ardent fans without begging them to love it, it will also provide a great starting point for people who wonder what all of the fuss is about.

If this is the direction that Disney’s anthology films are heading in, then I welcome them – even if I have massive worries about seeing Han Solo played by anyone other than Harrison Ford. Certainly Episode VIII in 2017 has a lot to live up to after this re-affirming, and strangely uplifting, entry into my favourite film series.